Roundtable Discussions   |  Book Reviews   |  Culture, Literature and Arts  |  Economics   |  Policy Papers  |  Interviews  |
What Would Be Different If the Peace Process Was Run by Women?
By Hind Khoury 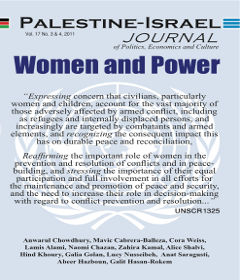 Hind Khoury
Ambassador Hind Khoury was the delegate general of Palestine in France (2006-10) and a former Palestinian minister of state for Jerusalem Affairs.

Upon first reflecting on the topic under discussion - "What would be different if the peace process was run by women" - I thought it to be an indirect expression of a deep frustration with the peace process. Many observers and stakeholders worldwide realize that if the process is not entirely dead, it is undoubtedly breathing its last breath.

One can justifiably point to the reality where the Israeli government has repeatedly proved against the international community's will that it is not interested in peace on any terms other than its own. The government has tried for a long time to manage the peace process instead of seeking to arrive at a conclusive peace. One can also argue that all of the protagonists have played a part in hindering the process at one time or another. However, judging from the reality on the ground, it is Israel that is adamant to keep pursuing the same policy of annexing as much Palestinian land as possible and clearing it of its Palestinian inhabitants - a policy in flagrant violation of international law. The continued Israeli colonization of the West Bank and East Jerusalem is but one example.

The speech of Israeli Foreign Minister Avigdor Lieberman delivered at the United Nations last September (2010) functions now as a concise embodiment of Israeli policy. To cite some examples of his policy proposals: Lieberman referred to the exchange of populated territories, a far cry from the "land for peace" formula. He also pointed to the futility of Palestinian demands to place the issue of Jerusalem on the negotiation table. And he emphasized the fact that Israel is a Jewish state, expressed in the racist legislation drawn up in recent months. There is no question that Israel is guilty of the arrogance of power, and it has for a long time been perpetrating the most unspeakable, and even criminal, acts.

We are being asked to think outside the box in terms of how women might harness the political weight needed to alter existing realities. This is an important exercise at a time of total deadlock in the peace process and of a dramatic change in the Middle East.

The evolution of events during the first decade of the 21st century has been dramatic, violent and ominous. The developments that have taken place are very telling and, clearly, the end is not yet in sight. A new world order and a new Middle East are coming upon us at a faster pace than expected. These changes are the natural result of a number of factors, such as an increasingly globalized world, the information revolution, better-educated youth, poor socioeconomic conditions, a shift in the balance of power worldwide and the futility of past American policies regarding the Middle East.

The change in U.S. policy towards the region, as expressed in President Barack Obama's Cairo speech, was a strategic shift designed to align with American interests. In spite of the failure of this statement of intent to bring about tangible changes, it remains an important milestone, in my view. In brief, new formulas for action are required at this juncture if we are ever to move away from the growth of extremism, increased violence and wars. In this context, women must play an important role and maintain their strong priorities aimed at building a better world for future generations.

The question of women's place in the peace process is hypothetical, not only because women are prevented from attaining a monopoly over political power, but also due to a lack of determination. Neither Palestinian nor Israeli women have made a determined decision to participate in or to sufficiently affect the peace process, directly or otherwise. In general, I have great admiration for both Israeli and Palestinian women who have arguably forged a status of sainthood for themselves.

I do not see a fundamental difference between men and women, as it is the conditions that make the person. For example, I think motherhood would bring a substantial difference to all women in terms of priority. However, women do not normally chase personal power turfs, nor do they accommodate the power of capital or geopolitical interests if they do not serve the nation's or community's interests. They do not agree with the adage that "might is right," or with "the end justifies the means" approach, let alone with warmongering or the ravaging of societies. Realpolitik is hard on women as we tend to fight against it, but it has been prevalent in our life to a shocking degree, thanks to the United States blind support for Israel.

In the Palestinian context, women are currently participating in the electoral process but have not acquired legitimacy in the political arena due to their primary identity as homemakers. They have to deal with what is still essentially a tribal culture with a traditional system of loyalties. They bear the double burden of pursuing jobs and raising families and they face discrimination, in spite of declarations and policies to the contrary. I must acknowledge that in the Palestinian Authority we are on the right track with the introduction of substantial changes to this reality, though it is a lengthy process.

Another important point to note is that women, like men, are not a homogenous category. I work on the assumption that the women who can make a political difference will generally have an ideal profile: highly educated, with solid professional experience; law-abiding; principled; upholding non-violence and the universality of human values; and prioritizing national, community and family interests over personal interests. In short, perfect. I am not, however, excluding men who have such qualities. It is these human qualities that finally matter - qualities that can make a difference in the achievement of genuine and lasting peace in our region.

Let us imagine what would have been different had such women been in charge of the peace process.

These women would not be indifferent to suffering, injustice and violence and would not allow themselves to be stripped of their humanity. They would succeed in creating the necessary confidence-building conditions between Israelis and Palestinians without having to receive external instructions in this regard.

I believe women are better democrats and can work with more ease, patience and compassion with their public. They would not work alone in an ivory tower but would find ways to consult with people in various direct and indirect ways and prepare the ground for any future agreement. Women would be more rational and realistic and would try to convince their respective publics that the two-state solution along the 1967 borders and the principle of sharing is the only option for the foreseeable future. Women are more law-abiding and pursue the force of the law rather than the law of force. They would respect international law and human rights as an inalienable right of all people, irrespective of ethnicity or creed. I believe they would have insisted on the implementation of the Fourth Geneva Convention in the Occupied Palestinian Territories, including East Jerusalem, and would have secured the rights of people under occupation, as we pursue the search for a political solution.

Not only were none of the above objectives pursued, but, in addition, Palestinians were consciously forced into a state of chaos soon after the second intifada. Consequently, political assassinations, massacres and further land confiscation abounded; Palestinian political prisoners grew to over 10,000 and continued to be denied any rights; and Palestinian water resources were abused. All this culminated in the war against Lebanon in 2006, followed by the criminal offensive on Gaza in early 2009. Perhaps, too, there would have been no Hamas-Fateh divide. Moreover, the successful conclusion of a lasting peace would have radiated to the whole region, allowing genuine democracies to develop more smoothly and, most importantly, avoiding so much loss in human, moral and material terms. This is, of course, an ideal situation, but the dynamics behind it are possible and could make a difference. I feel the winds of change blowing quietly and patiently.

Historical forces, it is to be hoped, will lead us to peace and relative justice, although when and at what price I do not know. I present two examples of regional change which can aid in understanding such forces. The first is the case of Turkey, which, while it is a strong ally of the U.S., is now basing its foreign policy on detente and cooperation with all its neighbors. The second is the absence of the invisible helping hands to support former Tunisian President Zine el-Abidine Ben Ali during his recent ouster from power. This has been significant.

Sooner or later, we will have to acknowledge our common humanity and agree to share resources. Women, if well organized and determined, could be an important catalyst to hasten this process by collectively creating a system which helps women reach decision-making positions and by creating pressure groups at the civil society and popular levels.

I envisage a joint women's movement implementing change in order to effect short-term solutions - for example, to campaign against colonization, especially in Jerusalem, to liberate our Jerusalem parliamentarians who for months have been taking refuge at the Red Cross, and equally to seek to return to the Palestinian Jerusalemites their revoked residency cards so as to ease the anxiety of youths and reunite families. More could be done to follow up on the European Union's Jerusalem report so that it could be adopted and implemented; the same applies for the cause of our political prisoners. Additionally, we could discuss and approve a common historical narrative, which has been so much abused and manipulated to legitimize mythical claims.

A determined women's movement with huge networking potential could have the political weight necessary to shape a constructive political process in order to reach a peace agreement. More importantly, women should be ready to contribute to the building of peace after an agreement is signed. One must admit that, were women to succeed at one single endeavor, this would have important resonance with regard to changing the overall environment of the peace process. This is achievable with the support of determined women, locally and internationally, who are ready to make history. We shall then be supported by more peoples and governments than we could have imagined.

This article is based on a presentation that was made at a discussion on "What Would Be Different If the Peace Process Was Run by Women?" organized by Israel Palestine Center for Research and Information (IPCRI) on Jan. 19, 2011, in Jerusalem.