Nissim Lebovits
Nissim Lebovits is an undergraduate at Vanderbilt University, where he studies History with a concentration in the Middle East and Africa. He is living in Jerusalem for the year, studying at the Hebrew University and currently interns for the PIJ.

In recent years, much ado has been made about the increasingly prominent role of Evangelical Christians in supporting Israel, particularly in the United States. Groups like American pastor John Hagee’s Christians United for Israel (CUFI) have arrived to center stage in lobbying the US government on behalf of Israel, and in funding pro-Israel, anti-Palestinian activities across the US and the wider world. In the US, Evangelical Christians represent the largest constituency of pro-Israel support, even larger than American Jews, with some 60 percent of Evangelicals in the US saying that their government should support Israel “even if its interests diverge with American interests”.1 This past year, Evangelicals also played a key role in US President Donald Trump’s much-maligned decision to transfer the US Embassy from Tel Aviv to Jerusalem.

The basis for Evangelical support for Israel is two-fold: First is the deep-rooted apocalypse narrative inherent to Evangelical Christianity, in which the world’s Jews must be gathered into Israel and then either convert or die, which will supposedly precipitate the Second Coming of Christ. As a Brazilian pastor explained during a pro-Israel Christian march in Jerusalem last year, “We are supporting and praying for Israel, because if Israel is strong, then it will help bring Jesus for the second time”.2 In keeping with Evangelical religious teleology is an equally pernicious Orientalist narrative of the clash of civilizations, a belief that the Judeo-Christian West is at war with the Islamic East. The Israeli government has pandered to this belief in recent years, with Israeli Prime Minister Benjamin Netanyahu saying in a speech at CUFI’s 2017 conference that Israel and Christians are united in “a struggle of civilizations. … a struggle of free societies against the forces of militant Islam. … They want to conquer the Middle East, they want to destroy the State of Israel, and then they want to conquer the world”.3

With the divide between American and Israeli Jews rapidly widening, Evangelicals today represent the current hard-right Israeli government’s most reliable base of support in the United States. Many people have taken notice of this dynamic, but what remains largely unmentioned is its converse: Evangelicals, particularly American Evangelicals, have steadily built up a strong influence over Israeli government, policy, and society. As early as the 1970s, they began to exercise influence over Israel, travelling there in growing numbers, and founding groups in the US to lobby the government and the news media on behalf of Israeli interests. They provided aid money to Israel and promoted immigration to the state, in particular with groups like the Soviet Jews. During the 1980s, they created many of the well-known lobbying groups active today, such as the International Christian Embassy in Jerusalem (ICEJ), which was founded to counteract the refusal of the international community to recognize Jerusalem as the capital of Israel. Critically, they consistently opposed efforts to bring peace to the region, seeing these as detrimental to their teleological aims. Only with the arrival of the 21st century, however, did the Evangelical influence on Israel become truly pervasive. 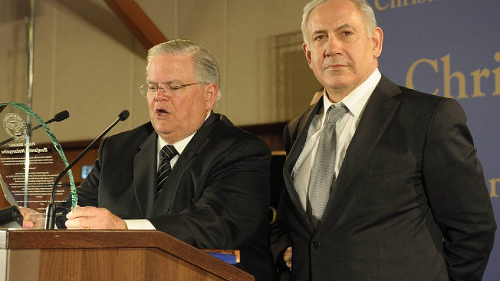 Netanyahu and John Hagee standing together at a Christians United for Israel conference.

Today, Evangelical influence over Israel is widespread enough to merit examination in three different contexts: influence over the Israeli public, over the Israeli government, and influence which specifically works to preclude a resolution to the conflict. In the public sphere, Evangelical influence has developed primarily along philanthropic lines; Evangelical money flows into Israel at a rate of nearly $200 million a year, tending to focus mainly on promoting immigration, helping the needy, and strengthening national security.4 This phenomenon of Evangelical funding in Israeli public society is now so stunningly widespread that even Yad Vashem, the national Holocaust memorial museum and educational center, recently announced a partnership with the ICEJ.5

The ramifications of this Evangelical funding are more than just superficial; they exert a tangible influence both on Israeli public opinion and on the actual composition of Israeli society. On a general level, the donations often serve to amplify socially conservative voices, both secular and liberal, and drive Israelis organizations into the arms of Evangelical groups offering funding. More fundamentally, Evangelicals influence the actual composition of Israeli society. Since the 1970s, they have ardently promoted Jewish immigration from around the world, often from marginalized Jewish communities, most notably the former Soviet states.6 Today Evangelicals cover the costs for one in every three new immigrants to Israel, a rate which continues to increase.7

In addition to Israel’s society, its government has also come more and more under the influence of Evangelical organizations. Within Israel and the Occupied Palestinian Territories (OPT), groups like the Ariel settlement bloc’s National Leadership Center (NLC), a collaboration between the settlement and international Evangelical groups, are now being subsidized by the Israeli government. As of 2018, the NLC will receive 1 million shekels a year from the Israeli Education Ministry.8 Similarly, Hayovel, an Evangelical group which brings Christians to volunteer on settlement farms in the OPT, receives an annual stipend from the Strategic Affairs Ministry as compensation for “their advocacy work on behalf of Israel and the settlement movement in their communities abroad”.9 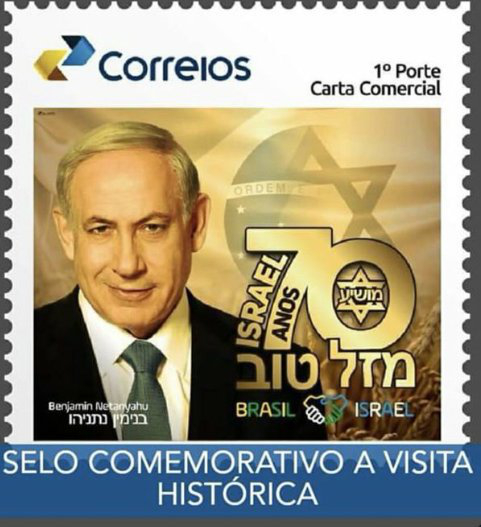 Commemorative regional Brazilian stamp honoring Benjamin Netanyahu on the 70th anniversary of the establishment of Israel.

Israel’s government has further moved to cement its apparently symbiotic relationship with Evangelicals by appealing to their values and religious beliefs. At the aforementioned 2017 CUFI conference, Netanyahu told the crowd that, “Since Israel liberated Jerusalem we have ensured the freedom of access to all faiths. … [Israel is] the only place where Christian communities in the Middle East thrive, they grow, not only survive but they have a future”.10 This attitude has led the Israeli government to seek out alliances with Evangelical-aligned governments around the world, especially in Asia, Africa, and Latin America. A notable recent example of this is the developing camaraderie between Netanyahu and Brazil’s new president, Jair Bolsonaro. Bolsonaro, the far-right candidate in Brazil’s recent elections, was elected largely on the basis of the support of the 20 percent of Brazil’s electorate who are Evangelical Christians. Shortly after the election a Brazilian province produced a stamp referring to Netanyahu as a “savior”, and Netanyahu referred to his open friendship with Bolsonaro as “an alliance of brothers”.11

In Opposition to Peace

What is most important to note about the Evangelical influence over the Israeli government is that it often runs directly in opposition to those who seek peace in the region. From the beginning, in 1948, Evangelicals hoped Israel would control even more territory than that upon which it was created. They not only strongly supported expansion after the Six Day War but also vehemently opposed returning any land, especially in and around Jerusalem.12 During Oslo, Evangelicals were an outspoken voice opposing any and all land concessions in the OPT, and more recently, groups like the ICEJ have worked hard to quash diplomatic efforts to achieve land-based peace agreements, supporting instead a continued and complete extension of settlements in the OPT, the area to which they refer as the “biblical heartland”.13

The escalation of the conflict in the last two decades has led not only to increased lobbying on behalf of Israel, but also an active movement by Evangelicals to support it via politics, tourism, and especially fund-raising. The international Evangelical movement now pours money into supporting Israeli settlements, both those deemed legal by the Israeli government and those which not even the government considers legal. Haaretz recently estimated that some $65 million was donated by Evangelicals to the settlement blocs in the last decade, including to “right-wing NGOs” and “illegal outposts”, and that significantly more money likely went unaccounted for because of a lack of transparency in such donations.14 And while most mainstream Jewish philanthropic organizations donate little to no money to the settlements, many Evangelical organizations actively seek to support them, with groups like Blessed Buy Israel, setting up websites to allow direct and intentional purchases exclusively from the settlements.15

Perhaps the most dangerous trend in Evangelical support within Israel, however, is the way in which such groups often legitimize and amplify the fringe lunacy of extremists like the Third Temple Movement (TTM). Though the TTM enjoys miniscule support within Jewish society (both in Israel and in the US), Evangelical Christians believe that the Dome of the Rock and al-Aqsa must be destroyed and the Third Temple built in order for the Second Coming to occur. This dynamic means that groups like the Temple Mount Faithful, a group seeking to eliminate both Muslim shrines, have far greater support among American Evangelicals than among Israeli Jews, which no doubt adds fuel to Muslim fears about Israeli encroachment upon the Temple Mount.16 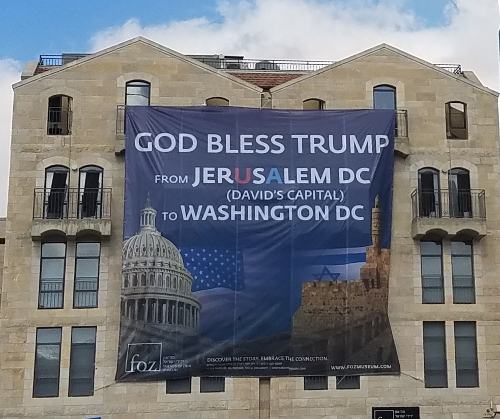 Illustrative photo of a pro-Trump banner outside of the Evangelical "Friends of Zion Museum", Jerusalem.

Yet in spite of the blatant danger posed by the increasingly pervasive Evangelical influence in Israel, little opposition to it exists. While many Jews, both in Israel and abroad, condemn the proselytic impulse of the Evangelicals, Israel’s government has done little to counteract their influence. Motivated by a desire to appear to the West as a pluralistic and tolerant state, Israel has not restricted the growth of groups like “Jews for Jesus” and other messianic and/or Evangelical groups within Israel. While many Jews, both secular and religious, view these groups as pernicious, the Israeli government has protected their right to proselytize.17 Furthermore some ultra-religious Jewish groups even see the Evangelicals as allies in their quest for a much more socially conservative state and society, thereby creating an odd alliance of extremism. There is thus no clear opposition to the entrenchment of the Evangelical agenda within Israel.

As the Israeli government continues along its rightward trajectory, it seeks out new allies. The established dynamic of Evangelical support within the US remains relevant, but in order to understand new and dangerous trends within Israeli society and policy, it is critical to recognize the ever-growing impact of Evangelical influence within Israel itself. Such influence has literally shifted not only attitudes within Israel, but the country’s actual societal composition, and, moreover, has informed and continues to inform many major policy decisions. It is telling that, as a parting remark at the CUFI conference, Netanyahu advocated for the establishment of an Israeli ambassador not to a particular country, but to the international Evangelical community, saying, “we have no better friends in the world” than Evangelical Christians.18 In order to understand and anticipate Israel’s trajectory in the coming years, we must, like Netanyahu, recognize the potency of this new paradigm.