Roundtable Discussions   |  Book Reviews   |  Culture, Literature and Arts  |  Economics   |  Policy Papers  |  Interviews  |
'We Cannot Count on Men to Create Peace. We Have to Do It Ourselves.'
By Eetta Prince-Gibson
By

At the culmination of the two-week, cross-country march, Israeli and Palestinian women vow to continue their struggle until an agreement is reached. 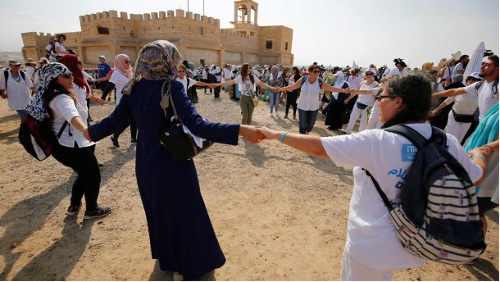 From a celebration at the Dead Sea, to a march through the streets of Jerusalem, to a demonstration outside the Prime Minister’s residence, thousands of Israeli and Palestinian women Wednesday marked the conclusion of the March of Hope.

The march was organized and sponsored by Women Wage Peace, a non-partisan women’s group founded in 2014 in the aftermath of Operation Protective Edge in Gaza, which, according to its flyers, calls for an agreement that will be respectful, non-violent and accepted by both sides. “We will not stop until a political agreement, which will bring us, our children and grandchildren a safe future, is reached,” says their website. Organizers say the group is funded mainly by small donations from Israel and abroad, as well as by the Women Donors Network in the United States.

The cross-country March of Hope began on October 5, when some 2,500 women walked the first 5-kilometer segment from Rosh Hanikra on the Lebanese border to Achziv Beach, north of Nahariya. Every day since then, women have participated in 5 to 10 kilometer walks in different locales throughout the country, including one group that walked and biked in segments from Eilat to the area abutting the Gaza Strip.

Wednesday's events began at Qasr al-Yahud, the site where Jesus is believed to have been baptized by John the Baptist. Some 2,500 Jewish and Arab Israeli women arrived on buses from all over the country, from as far away as the Sea of Galilee and the Negev and Arava deserts. They were joined by more than 1,000 Palestinian women from the West Bank. 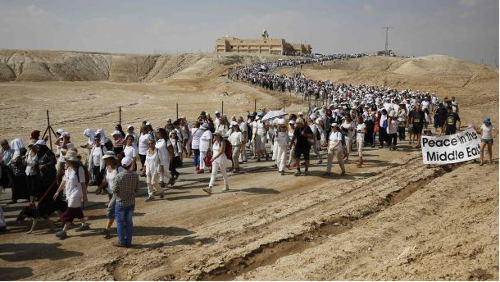 According to Ziad Darwish, a member of the Palestinian Committee for Interaction with the Israeli Society, which operates under the auspices of the Fatah party, the Palestinian women received political and financial support from Palestinian Authority President Mahmoud Abbas and the Authority itself, which paid for the chartered buses, water and hats with a dove logo that the women wore, many over their hijabs.

Because Qasr al-Yahud is a religious site, an on-duty policeman explained to Haaretz as he watched the gathering from a distance, a permit to convene is not required for neither the Israeli nor the Palestinian women.

The atmosphere was celebratory — almost heady — despite the searing heat as a women’s drumming group set the rhythm. When the Palestinian women came off the buses, many were embraced by Israeli women; others formed impromptu dance circles.

“Today I have Israeli Jewish sisters,” said Maryam, a 35 year old teacher from “near Jenin.” Enthusiastically, she clapped along as others danced. Maryam acknowledged that she didn’t want to give her full name because “not everyone in my family agrees. Especially not the men, who don’t want women to express themselves.” She added, “I came here, even though I had to take off a day from work, because I do not want anyone to be killed — not by soldiers, not by terrorists. We women want peace and security for everyone. And I know that most people in Palestine think like me.”

Fadwa Shear from Ramallah added, “We cannot count on men to create peace. We will have to do it by ourselves.”

But what about non-normalization, which some Palestinian activists cite for their refusal to meet with their Israeli civil-society counterparts?

“This gathering is not ‘normalization’,” Shear retorted. “We are political women calling on our leaders to reach a political agreement. I am very proud to be here.”

Leymah Gbowee, the 2011 Nobel Peace Prize laureate and leader of the women’s activism that brought an end to Liberia’s bloody civil war, was Women Wage Peace’s guest of honor. “Men try to demean women’s activism as if it isn’t important, as if it isn’t ‘the real stuff,'" she said in a brief interview with Haaretz. “But guns and bombs are not aimed only at men. Women suffer real pain — and we have real things to say. And women have the ability to come together and bridge our divides — and that is very real, very political and very powerful.” 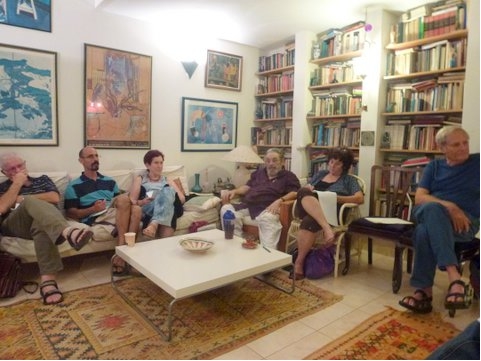 Later, speaking from the podium, Gbowee energized the crowd despite the oppressive heat. “If you cannot see hope, if you cannot see peace, then you are blind,” she said forcefully, as the crowd rose to its feet, cheering and applauding. “You must reject the narrative that war is the destiny of our children. War is easy, making peace is hard. But sisters, today you’ve made history! No one will be able to ignore your call for peace anymore.”

Hind Khoury, an economist and a member of the PIJ editorial board who has served as the Minister of Jerusalem Affairs in the Palestinian Authority and was the delegate general of the Palestinian Liberation Organization to France from 2006 until 2010, also challenged the crowd. “This is women’s power at is best,” she said. “But will you last? Will you do the hard work? The hard part begins tomorrow — will you keep up the hope in our region that is plagued with violence and despair?”

“The 50 years of rule over the Palestinian people, from cradle to grave, cannot go on,” said Khoury. “Our people are ready for peace. President Abbas is ready for peace. We women have come together to tell all our leaders to work towards a negotiated agreement.” In addition to these and other speakers, singers Yael Deckelbaum and Miriam Toukan performed. The event was MC’d by Hamutal Gouri, a women's activist and a Women Wage Peace leader, and Huda Abuarqoub, regional director of the Alliance for Middle East Peace and a resident of Hebron. Gouri concluded the ceremony at Qasr al-Yahud by saying, “Motherhood is not only the act of bearing and rearing our own children. Motherhood is a spiritual and ethical position of responsibility for the world and for future generations.”

Many of the women returned to Jerusalem, where, joined by others, they formed a crowd of 5,000 that marched from the city entrance to the square near the Prime Minister’s residence for the concluding demonstration. Over the next few days, the organization will set up a “peace tent” on this spot.

Since its inception, Women Wage Peace has maintained a non-partisan stance, calling for a peaceful political solution to the Israeli-Palestinian conflict without siding with any particular option. “The world does not need another peace plan. There are already many excellent plans,” Gouri explained to Haaretz. “What we need is true intent to make peace. And that is what we women are demanding from our leaders: determination and courage to engage in peace negotiations.”

This big tent approach, the women believe, will enable them to broaden their support base beyond its natural left-wing constituency.

Indeed, Hadassah Froman, widow of Rabbi Menachem Froman, and her daughter-in-law Michal, who was pregnant when she was wounded in a stabbing attack by a Palestinian in January, both spoke at the demonstration. The two women, who live in the West Bank settlement of Tekoa, were warmly welcomed by the crowd. “There is great energy here, and it can bring us to a new way, to change," said Hadassah Froman. As she held her infant daughter, Michal Froman added, “I believe that peace, as we want it to be, will come from a place where we can see what is possible and what is impossible. The right can be part of peace, too. Life will be better here if we stop seeing ourselves as the victims of terror or the victims of the occupation. We all have to get over this and begin to work hard.”

Abuarqoub also spoke to the crowd: “I came as a Palestinian woman from the Occupied Territories to say, enough is enough! It’s time for peace and security for both people... You saw this morning how many Palestinian women joined you. I am here as Palestinian to say clear and loud — you have a partner!”

With the reconvening of the Knesset for the fall session in November, the activists from Women Waging Peace will maintain a vigil outside the Knesset calling continuously for a negotiated agreement. They also plan to meet with all of the members of Knesset, beginning with the female members, in all the parties across the political spectrum.

The PIJ wants to thank Haaretz for allowing us to reprint this article, originally published on October 20th, for the benefit of our readers. The original article can be seen at the following link: http://www.haaretz.com/israel-news/.premium-1.748406