Silvia Hassouna
Silvia Hassouna has a BA in Intercultural Communication and is currently pursuing a Masters degree in Globalisation and Development Studies at Maastricht University. She was an intern at PIJ and is now writing her final dissertation about the impact of the separation barrier on Palestinian and Israeli civil society organizations.

On May 28th, the ninth annual Jerusalem Hug took place near Damascus Gate. I reached the group at HaGan Haleumi (The National Park) between New Gate and Jaffa Gate. It was a troubled although colorful event. The participants of the Jerusalem Hug – mostly Jews and internationals – were wearing hearts on their clothes and sunglasses, standing together or sitting in circles. Guitars were playing, people were singing.

A man in kippah passed by and said to his young son: “I think the leftists are here”.

Next to the cheerful rendezvous, a group of Palestinians started screaming and shouting. At the center of the noisy crowd, two men were arguing and pushing each other. Tension increased as some guy tried to film the scene. Women, children and old men were surrounding the two guys.

Things quickly escalated and the group ended up fighting, theatrically, on the rails of the light rail train. A little girl was crying and screaming, while trying to keep her father out of the fight. The guitar did not stop playing even when the fighters started hitting, pushing and punching. The screams of the protesters and the music of the “Jerusalem huggers” came together, forming a contradictory and restless concert.

An observer could see the participants of the Jerusalem Hug forming a circle and, hand in hand, walking around trees and, a few meters further away, the ongoing fight – that, in the meantime, had moved in front of New Gate. The blood and the violence attracted a crowd of curious young boys, pedestrians and tourists. I walked towards New Gate and saw that one of the men involved in the fight was bleeding. Friends and family kept on screaming, until the police arrived.

Normalisation is the label given to any activity that reinforces the status quo. The status quo commonly refers to the permanent Israeli occupation, the lack of political rights and freedom and the obstruction to the right of self-determination for the Palestinian people. Many Palestinian civil society activists say that it is not possible to collaborate with Israeli civil society today, given the current political and social conditions. 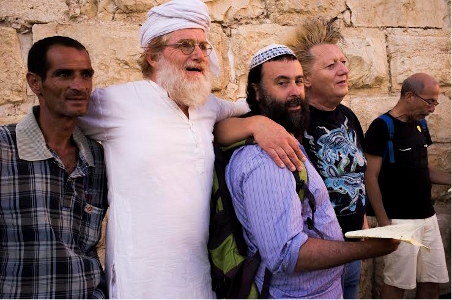 Participants are holding hands and singing in a circle during the Jerusalem Hug: (Photo: Silvia Hassouna)

Whether Jerusalem Hug contributes to normalising the conflict is open to debate. Before that, there is a more instinctual and primitive element that emerges when reflecting upon Jerusalem Hug 2015’s developments. Jerusalemites are scared, sceptical and frustrated from decades of tensions. “The situation in Jerusalem gets worse every year, and people are not willing to see their houses been taken by settlers and hug Israelis at the same time" said a young Palestinian woman, commenting on the Jerusalem Hug initiative. Most of the people from both sides, not only the anti-normalisation activists, might not want to see their people hugging because they feel this act, given the current political situation, would be insincere and somewhat manipulative.

All in all, the event lost momentum because of the lack of participants, especially Palestinian participants. It is still hard to estimate the number of Palestinians that would have taken part in the event if they could, because some people from the West Bank were not issued the permit to access Jerusalem, and people that were able to attend might have been discouraged by threats or peer-pressure from family and friends.

Protesters were fighting for media attention

The power of such a demonstration, especially when so few people were able to attend, mainly depends on its echo in the news and amongst other organisations. Conflicting narratives were competing for media attention. The consequence, in such a tense atmosphere, is that the two groups – anti-normalisation activists and Jerusalem huggers – were somewhat fighting for “their story” to become “The Story”. Should the day be about coexistence and unity amongst human beings, or should it be about injustice, oppression and exploitation of the Palestinian people?

Thus, more than bringing people together, the event seems to have unleashed a competition for the media’s attention. I saw some journalists with cameras, abandoning the circle of singing people from the Jerusalem Hug to film the confrontation in front of New Gate and I asked them what they were reporting. The answer was: “We were here to film the Jerusalem Hug event, but it does not make sense if no Palestinians are there, so now we have to film this”. Thus, I asked them what kind of story they were aiming to tell now. “We don’t know yet, let’s see how it ends” they said.

Increasing tension in the Holy City

What does this episode say about the current situation in Jerusalem?

Apparently, al-Quds cannot rest, not even for one afternoon dedicated to peace, harmony and justice. The past year has been distinguished by a number of sinister developments that are constantly exacerbating the coexistence – continuous evictions of Palestinians, youths from both sides kidnapped and killed, increasing episodes of violence and extremism and the results of the recent elections– and Jerusalem, the core of the conflict, vibrates with tension and fear. In 2007 people welcomed the Jerusalem Hug event with much more enthusiasm. However, the situation now is different. Today, the symbolic act of gathering together to sing in front of the Old City is widely perceived as singing out of tune.