Menachem Klein
Prof. Menachem Klein is senior lecturer in the Political Science Department at Bar-Ilan University. His book A Possible Peace Between Israel and Palestine — An Insider’s Account of the Geneva Initiative was recently published by Columbia University Press.

The war Israel is currently waging against Hamas is a war of choice. Here is how events have unfolded. 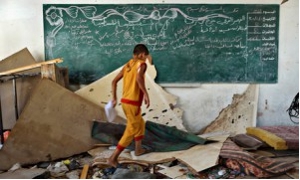 Secretary of State John Kerry failed to restart Israeli-Palestinian final status negotiations. Mr. Kerry made mistakes in managing his initiative, but the main reason for his failure is Prime Minister Benjamin Netanyahu’s hawkish stance. He refused to accept an American plan for security arrangements in the Jordan Valley, refused to negotiate over East Jerusalem, put the precondition of Palestinian recognition of Israel as a Jewish state as a precondition to reopen the negotiations, and expanded settlements on an unprecedented scale. The talks ended when Netanyahu refused to implement what he agreed to: the release of the last group of prisoners.

As a result, Mahmoud Abbas became disappointed by Kerry’s mismanagement. He had no faith in Netanyahu but he did expect Kerry to put heavier pressure on the Israeli Prime Minister. When his hopes did not materialize he pushed forward the option to establish a joint government with Hamas. Hamas also found itself in trouble: Egypt under General Sisi is hostile, Hamas lost its base in Syria and faced financial problems in the Gaza Strip. Thus, Hamas was ready to moderate its positions and go one or two steps forward in politicizing itself and establish a joint government with Fatah.

The new government was not rejected by the US and European governments. To the contrary, the international community saw it as a chance to test Hamas if not to moderate it. But Israel saw it as a great threat. Mostly as a threat to its status quo policy of de-facto annexation of 60% percent of the West Bank while in the remaining 40% of the territory, Abbas serves as a veritable subcontractor for Israeli security. Moreover, the Israeli policy toward the Hamas regime in the Gaza Strip was to cut it off from the West Bank, to control the area from the outside and achieve Egypt’s cooperation in isolating Hamas. Thus, Israel considered a Palestinian National unity government as strategic threat on its control over Gaza Strip and de-facto annexation of the West Bank.

Now came the opportunity Netanyahu would sieze upon. A Hamas cell in Hebron kidnapped and murdered three settler boys. The cell acted independently without the approval of the Hamas leadership, in fact the latter denied any relation to the affair. However, from day one it was clear to Israeli authorities that the three poor boys were dead, and it misled its public and world opinion. Israel managed a world wide campaign under the slogan “bring home our boys,” further demonizing Hamas.

Under this campaign Israel arrested more than 400 Hamas West Bank activists, including political and religious leaders. The Israeli aim was to destroy the new Palestinian coalition and undermine its international legitimacy. Israel wanted to rewind the tape and restore Hamas and Abbas to their previous status dancing to Israel’s tune. During this anti-Hamas campaign, Netanyahu fomented anger in public opinion bordering on racism. This led to the murder of a 16-year old Palestinian boy from Jerusalem by orthodox Jewish extremists on July 2nd, followed by violent clashes between angry Palestinian youth and police in Jerusalem as well as a Jewish mob attacking Arabs not only in Jerusalem, but also in cities throughout Israel.

Fighting broke out on July 7 this year when Israeli aircraft bombed a Hamas tunnel. Israel argued that Hamas armed forces planned to implement a terrorist attack through this tunnel. Six Hamas men were killed in this attack. Following this event Hamas began launching massive rocket attacks on Israeli civilians. Up to this point, organizations other than Hamas launched sporadic rocket attacks and fired shells on settlements adjacent to the Gaza Strip. However, from July 7 Hamas took the initiative and began attacking Israeli civilians.

As the Israeli attack developed, Abbas joined forces with Hamas. He and the Fatah leadership have stated that they will not dissolve the national unity government. Moreover, Fatah called its people to confront Israeli soldiers at check points in the West Bank and in East Jerusalem. Finally, Abbas endorsed Hamas’ terms and conditions for a ceasefire: first and foremost the need to end the blockade Israel and Egypt has placed on the Gaza Strip.

In sum, Israel has failed to topple the Palestinian coalition, created wide international criticism over her army killing and wounding thousands of innocent civilians, and solidified Hamas’ position as a key role in any ceasefire and political settlement.

This article originally appeared in Logos, a journal of modern society and culturehttp://logosjournal.com/2014/war-of-choice-the-real-story-of-israels-war-against-hamas/