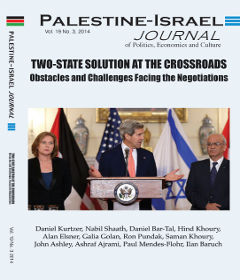 Hind Khoury
Ambassador Hind Khoury was the delegate general of Palestine in France (2006-10) and a former Palestinian minister of state for Jerusalem Affairs.

What are the challenges to peace in 2014? The date is worth emphasizing, since attempts to broker peace in the Middle East are anything but new. In fact, the 1979 Camp David accords with Egypt are already 35 years old, and the Israeli-Palestinian peace process is entering its 23rd year. The process is growing stronger, but genuine peace is weakening by the day. In the meantime, there have been countless studies, articles, books, maps and reports addressing all aspects of this conflict. The parameters of a peace agreement and its references are known to all: relevant United Nations resolutions, the Madrid Peace conference, the Land for Peace formula, and the Arab Peace Initiative. These parameters should have led to the establishment of a Palestinian state in the territories occupied in 1967 (on only 22 percent of historic Palestine, their natural homeland) by 1999 with a just solution to the plight of Palestinian refugees and living in peace and security alongside the state of Israel.

Explaining the Past Failures of Negotiations

Over the years of negotiations, pressure was exerted mainly on the Palestinian side to make more compromises, such as through the Clinton Parameters, under which Palestinians agreed to the principle of land swaps, or the Annapolis talks, in which Palestinians presented in writing their compromise position on borders and security.

There are also many explanations for why the negotiations have continuously failed: Left to themselves with no third party involvement and the highly skewed balance of power between Israelis and Palestinians, the only agreement that can be reached is a victor's peace that forgoes all elements of justice.

Third parties, especially the United States and the European Union, neither took the necessary action to implement their stated policies of support for Palestinian rights nor secured the implementation of signed agreements or the respect of the most basic elements of international law and human rights. Worse still, they sought to bend and ignore international legitimacy on the matter to meet Israel's demands and maneuvers.

There are also the facts on the ground that prevented a workable solution. It is no secret that Israel has used the peace process to create more facts on the ground to prevent the implementation of this solution through whatever illegal means it could dispose of: the expansion of Jewish settlements with their elaborate infrastructure within the territories occupied in 1967 , land expropriation, fragmentation of the Palestinian socioeconomic fabric, control and consumption of water resources, construction of the Separation Wall, placing East Jerusalem under siege, weakening the economy and pushing Palestinians out of rural areas into crammed urban centers. In addition, the Israeli government and army have given the Jewish settlers a free hand in the use of daily violence against Palestinians in their homes and on their land in a push to further their dispossession and expulsion.

All parties know this information and the details require no repetition. All these violations of international law have been ongoing for 46 years, and to new and more dramatic levels, in total impunity. This odd and most unjust situation under which Palestinians are forced to survive has been sustained because of the privileges accorded to Israel by Western countries as an exceptional state above the rule of law.

At this juncture, it is important to revisit the negotiation strategy first used by the Israelis and studied in its many aspects by the Israeli British historian Avi Shlaim in his book The Iron Wall. While the traditional story is that Arabs have refused to negotiate peace with Israel, Shlaim has shown that not negotiating was a tactical strategy used by the Israelis from the onset.

The iron wall was a strategy devised by the Zionist movement stipulating that peace negotiations with the Arabs should happen only under conditions of power asymmetry where Israel is the strongest party. Ze'ev Jabotinsky is quoted by Shlaim as saying, "…the sole way to such an agreement is through the iron wall, that is to say, the establishment in Palestine of a force that will in no way be influenced by Arab pressure.

This formative policy included important basic concepts that have been clearly adhered to: first, ignoring the opinion, attitudes and demands of the Arabs; and second, concentrating on forging a strong and strategic alliance with the superpower of the time. It also emphasized the Western orientation of the Zionist project, with no wish to integrate itself into the region. This worldview translated into a geostrategic conception in which Zionism was to be permanently allied with European and Western colonialism against all the Arabs in the eastern Mediterranean (Shlaim).

Another major component of the "iron wall" is pushing the Arabs to despair. Jabotinsky is again quoted by Shlaim: "Every indigenous people, he wrote, will resist alien settlers as long as they see any hope of ridding themselves of the danger of foreign settlement. This is how the Arabs will behave and go on behaving as long as they possess a gleam of hope that they can prevent 'Palestine' from becoming the 'land of Israel.'"

These days, when most Arab countries, especially those surrounding Israel, are weakened politically, militarily, economically, socially and ideologically, is it time for Israel to forge an agreement with the Palestinians and the Arabs and drop the Iron Wall? This is a principal question that needs to be addressed.

For so long, while about 70% of Israelis have said they want peace based on a two-state solution, the moment has never been right: After the assassination of Rabin by a Jewish extremist, the excuse was Palestinian terrorism; then Yasser Arafat was described as a terrorist and hence not a partner; and when he passed away, Palestinian Authority President Mahmoud Abbas, who condemns violence in strong terms, was not a partner because he is too weak, not representative of all Palestinians and an anti-Semite. Now, it is the presence of Hamas in a hermetically besieged Gaza that is characterized as a major threat to Israel's security through their homemade rockets; another good excuse is Palestinian incitement to violence even when they call for an end to occupation. To add insult to injury, more recently, Israeli Prime Minister Binyamin Netanyahu proclaimed that the core issue, if peace is to be forged, is for Palestinians to recognize Israel's right to exist as a Jewish state - a demand which was not made of either the Egyptians or the Jordanians. Yet, Israel, perhaps supported by U.S. Secretary of State John Kerry's peace initiative, wants to pit the whole body of law on the question of Palestine and decades of struggle and resistance to occupation and oppression by the Palestinian people against this new additional mythical demand. And thus, Israel continues to play havoc with the reference points of the peace process as these are left to its whims and excuses.

When Israel was created as a state built on the ruins of the native Palestinian people with the support of the imperial powers of the time, unsurprisingly it was only willing to negotiate in a position of relative strength. The question today is: Given its overwhelming status as a regional superpower with military and nuclear might, is the Iron Wall strategy still necessary? When it has reached a position of domination, with the support of the world's only remaining superpower, when its adversaries are weakened and collectively asking for peace (via the API), does the Iron Wall strategy make sense?

The strategy of negotiating only when the balance of power is in its favor has not changed, but the balance of power has greatly shifted since the strategy was first devised: Israel has secured 78% of the land; it has even secured settlement blocs in the West Bank and around East Jerusalem through the principle of land swaps; it has a very strong economy with a GNP at least 30 times that of the Palestinians, it has a stronger banking system than does the entire Arab world and an innovative and highly advanced technology sector; it has been accepted as a member of the Organization for Economic Cooperation and Development (OECD) with a worldwide export market; and it has a very powerful and well-equipped army as well as strong trade and diplomatic relations around the world in Asia, Africa and the Americas. In brief, Israel is not David; it is Goliath.

In 2014, the Iron Wall strategy is a strategy of hegemony, of arrogance: It means might is right; it means domination. It is an insatiable power that will devise excuses to stifle peace and impose domination.

This is the mentality that needs to change. Israel has received the guarantees and promises that it will be treated as an entity in the Middle East through the generous offer of the Arab Peace Initiative and solid international guarantees. However, it is unwilling to be accepted into the region and refuses to even recognize the interests and policies of its major and staunch allies, until the region itself changes to fit its worldview and interests and the Palestinians capitulate to its will.