Neal Sullivan
Neal Sullivan is a marketing executive from Cincinnati, Ohio, U.S.A. His company, Good Fortune (www.goodfrtn.com), advises companies how to strengthen their Corporate Social Responsibility initiatives to the greater good fortune of their communities and bottom lines. He is visiting the Middle East for the first time to expand his horizons.

There needs to be more direct face-to-face dialogue between God-fearing Jewish and Muslim religious leaders to solve today’s conflict in the Middle East. This conflict cannot be solved by politicians.

That is the perspective shared by Dr. Omer Salem, Senior Fellow of the Foundation for Religious Diplomacy, New York City, in his presentation, “The Role of Religion in Peace Making” held at the FELM Center in West Jerusalem on December 27, 2018. The program was hosted by Dr. Yehuda Stolov, Executive Director of the Interfaith Encounter Association, an Israeli non-profit Organization.

The attendance was small due to dreary weather, but that made the setting more intimate and the discussion more dynamic amongst a group comprised of at least one member of the top three religions being discussed: Muslims, Jews and Christians. 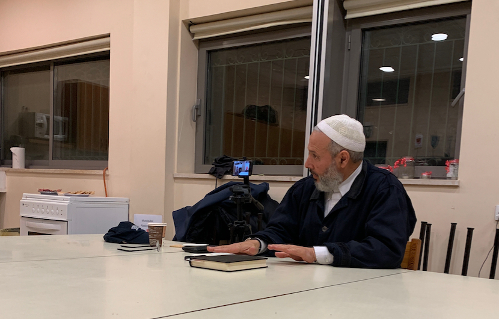 “Give me 10 God-fearing Muslims and 10 God-fearing Jews to work out our differences,” said Dr. Salem. “They must be religious figures, not politicians. This is not an Israel versus Palestine problem. This is a religious problem.”

The key word in Dr. Salem’s presentation seemed to be “moderate.” Extreme Zionists and Salafi’s, examples he used, tend to dominate the discussion on both ends of the spectrum, which makes it impossible to make any sort of progress based on compromise.

Another key religious group was featured in the discussion as being a barrier to progress: Evangelical Christians from the U.S. They, too, are on the far right of the political spectrum and considered extremists in many ways.

“Even the Zionists and Salafi’s could come together if the U.S. Evangelicals got out of the way,” declared Dr. Salem. (The irony of this presentation being held at the FELM Center, the Finnish Evangelical Lutheran Mission, was not lost on me.)

Surprising to me, the sole U.S. Christian at the table, was the amount of blame heaped on U.S. Evangelical Christians by both the Muslims and Jews for the current state of affairs between Israel and Palestine.

There is no denying the significant role the U.S. plays in Middle East politics. The U.S. government’s unwavering support of Israel is influenced greatly by U.S. Evangelical Christians who, like many Israeli Jews, refer to the West Bank in the biblical terms, Judea and Samaria. As a result, most Evangelical Christians support the Israeli occupation of the Palestinian West Bank and East Jerusalem, which makes it virtually impossible for the U.S. to be an honest peace broker. (Former U.S. President Jimmy Carter is also an Evangelical, so there are exceptions.) Muslims, on the other hand, support Palestine and are “livid” about the occupation, according to Dr. Salem.

“But now is the time for us to take responsibility for our own actions and future,” he said.

One of today’s hot topics to take responsibility for is the debate over the Temple Mount/Al-Aqsa Mosque. Some Jews feel ordained to build a Third Temple on the Temple Mount, and Muslims fear that Jews will tear down Al-Aqsa to make room for the Third Temple. Evangelical Christians — despite living thousands of miles away — side with those Jews, hence the flashpoint.

Navad, an Israeli-Jewish biology teacher with a seemingly encyclopedic knowledge of Jewish religious history and philosophy, spoke logically and passionately about Israeli plans for the Temple Mount. 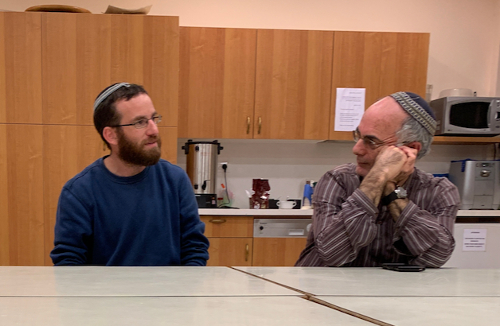 “We (the Jews) are NOT going to tear down Al-Aqsa Mosque!” he declared. “We know that doing so would cause bloodshed, and the Torah clearly says that no Temple can be built on blood. It just won’t happen.

“There is plenty of room on the Temple Mount to build the Third Temple without tearing down Al-Aqsa. Al-Aqsa is built on Herod’s front patio, so there is space to the south on which to build.

“But make no mistake,” he continued. “The Third Temple WILL BE BUILT, but only at the right time.”

Navad attended the event, he said, because he was passionate about the role face-to-face interpersonal dialogue can have in solving the conflict between Israel and Palestine, and welcomed a night like this.

“I believe that religion is part of Philosophy,” said Navad. “Philosophy is about understanding others, not converting them.”

It’s worth noting that from a Muslim perspective the Mosque is not the built area only but it includes the built area, the platforms (Masateb), the arched patios, and all the open space. Prayers, especially in feasts and holy occasions take place all over the site.

Dr. Salem agrees, and believes enough is enough when it comes to arguing which religion is best, or who is right and who is wrong.

Dr. Salem coined a phrase for such arguments: supersessionism.

“There has been a history of ‘supersessionism,’ of abrogation,” he said. “The Jews have the Old Testament. Then the Christians brought the New Testament to supersede the Old, saying ‘ours is better.’ And then the Muslims saw that and said, ‘Hey, we’ll do the FINAL Testament, the Quran, and trump them all!’

“We must learn to respect different cultures,” he said. “We must accept people on a religious basis. Now, religion is being used as a wedge.”

To change mindsets, Dr. Salem plans to host a seminar of 10 religious leaders from the Muslim and Jewish communities, moderated by a third-party that can truly be considered neutral. He is actively looking for funding.

“Only 15% of the world’s Muslim population is Arab,” said Dr. Salem. “So maybe we should look to Asia, maybe Japan, to host this event.”

Navad, joking but making an important point as to the complexity of the topic said, “If you go to Japan, you know that there are some Jews who think the Japanese are one of the 10 lost tribes, so be careful!”

Dr. Salem said there are 57 Muslim countries in the world. And because this is a global problem which needs a global solution, “we should look from the west coast of Africa to the east coast of Indonesia” for partners. 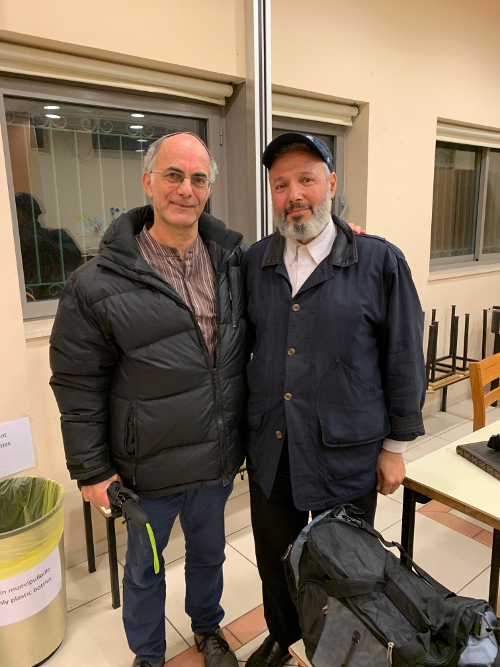 Host Dr. Stolov, summed the evening up by saying, “Things are quick to break, slow to heal.”

Maybe face-to-face encounters of moderate religious leaders, not politicians, as espoused by Dr. Salem, will speed things up.

Dr. Omer Salem is an American citizen of an Ecyptian origin, he is a Senior Fellow of the Foundation for Religious Diplomacy, New York City and is the founder of Guidance and Light for Peace, in Egypt and the USA, an inter-religious research association. His first visit to Israel was sponsored by the American Jewish Committee. Salem promotes the importance of using Islamic moral values as the basis for conflict resolution. He holds a Bachelor of Science Degree from the University of California at Berkeley and a Master Degree from the Yale University Divinity School. His PhD dissertation titled “AhlulKitab in the Quran” was supervised and defended at Al Azhar University in Cairo Egypt.