They were presented with this accolade at a packed gala ceremony at the Oxford & Cambridge Club in London, hosted by Lord Stone, with the presence of a very distinguished audience representing the elite media society in the UK, prominent public figures, leaders of the Jewish and Arab communities in London and diplomats including ambassadors of Palestine, Jordan and several other countries.

William Morris, the Secretary General of the Next Century Foundation, told reporters that AbuZayyad and Schenker were presented with the award in recognition of their “determination to shed light on the complex issues dividing Palestine and Israel…[their] work encourages peace and promotes rapprochement in this most difficult of arenas”. The award was given “in recognition of their continuing efforts to counter the dissembling that would otherwise increase levels of misunderstanding in today’s world, and to encourage freedom and tolerance,…and in acknowledgment of the way in which high standards of editing are a means towards reaching a more harmonious and concordant world without its present plagues of fear and violence…”

In his opening remarks, AbuZayyad noted that this event is taking place while at this very moment thousands of Palestinians prisoners are on hunger strike for several weeks. Some of them are facing serious threat to their lives, and he expressed his demand to put an end to their inhuman life conditions before it is too late. He said that he holds the Israeli government responsible for any tragic development that may occur. “In spite of all difficulties, I do believe in the importance of public opinion, and in continuing relentless efforts to change public opinion for the sake of peace. Neither the Palestinians nor the Israelis will make the other disappear, and the only option is making peace. The Palestinians are open for either a one state or two states, but the occupation must come to an end” he concluded.

Schenker noted that the PIJ is “a unique, Israeli-Palestinian joint venture, and that..”even during the darkest periods of Israeli-Palestinian relations, filled with conflict and fighting, the co-editors, staff and editorial board have remained committed to continuing to work together to produce quarterly issues which deal in an innovative manner with all of the central issues on the joint Israeli-Palestinian agenda. We are determined to continue to provide tools for our target audience of students, academics, researchers, NGO activists, opinion and decisions-makers, in the Middle East and throughout the world.”

Here is a link to a video from the award ceremony: 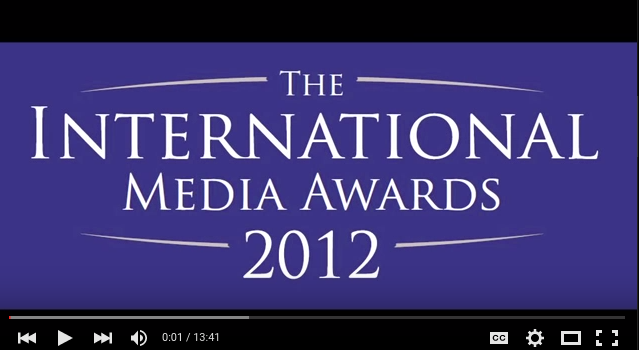 Here is a link to powerful short interviews with all of the awardees:

Dalia Salaam Rishani, President of the International Media Awards said “The Council’s purpose in presenting this Award is to promote excellence in journalism in the conviction that outstanding work will ,make a significant contribution to peace.”

The International Media Awards is an annual awards ceremony held in London to celebrate high standards of Middle East journalism held by the International Council for Press and Broadcasting, a subsidiary body of the Next Century Foundation

The awards are presented at a ceremony every year to honor editors and journalists and are held in recognition of the vital role that the media can play in contributing to understanding, without which no peace process is possible. William Morris, Secretary General of the Next Century Foundation explained: "By publicly recognizing the efforts of these editors and journalists, some of whom have put their careers and even their lives at risk through their commitment to reporting truthfully and responsibly, we hope to help raise the standards of journalism in reporting on the Arab Israeli conflict”.

The awards are divided into several categories. The Peace through Media prizes are for senior journalists who have contributed to better understanding throughout their careers, consisting of the symbolic gift of an olive tree. The Cutting Edge prizes are for journalists recognized for their high standards of analysis and reporting, often in conflict situations, consisting of a cash donation. The Breakaway prize is for young journalists who have already begun to make an impact at the beginning of their careers