“Whether my essay will win or not, I want to thank you for causing me to put my feelings down on paper. It was a very meaningful experience.” That was the reaction of Neriya Mark, one of the Israeli participants in the first Simcha Bahiri Youth Essay Prize Contest, organized by the Palestine-Israel Journal. Neriya was one of the young Israelis and Palestinians who participated in the award ceremony which took place at the Writers’ House in Tel Aviv on August 11, 2009, before an overflow crowd.  Following the fighting in Gaza, the topic chosen for this year’s contest was "The Day after the Gaza War: What can young people do to strengthen the prospect for peace?" and the contest was open to Israelis and Palestinians aged 17-24.

The ceremony recognized 21 students from Israel, the West Bank and East Jerusalem, who took on the task of challenging themselves and others with their stirring words. Maya Wind (19): We need an Israeli-Palestinian Doubt Forum The winning Israeli essay by 19 year old Maya Wind from Jerusalem, advocated the creation of “a joint Israeli-Palestinian Doubt Forum which would provide a way for Palestinians and Israelis to directly interact with each other before they reach the opposite sides of a checkpoint or a wall…and would refresh the framework of the political debate, and allow more freedom to think differently and come up with original solutions.” Maya wrote that “though young people have a natural tendency to rebel against the previous generation's values, opinions among them regarding the Israeli-Palestinian conflict remain static. 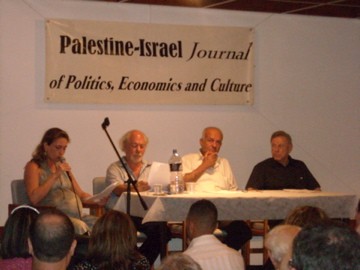 However, if the potential is there, it is merely a question of channeling this natural tendency in different directions, and broadening it to other realms. One way to expand this potential to the realm of the conflict is through nurturing the notion of doubt. Developing the notion of doubt increases the capacity to think in new directions and then to translate these ideas into innovative actions that can change the political reality of the region.” Khadra AbuZant (19): We need healing, engagement and reconciliation The winning Palestinian essay by 19 year old Khadrah Jean Jaser AbuZant from Tulkarem, called for a process of “healing, engagement and reconciliation.”

She emphasized the importance of “compassionate listening,” and such programs as ‘Creativity for Peace’ and ‘Combatants for Peace’ whose members, despite losing things most precious to them, such as a loved one or their freedom, can bring the strength and stamina needed to get through the toughest of times ahead… We need to openly allow these courageous young adults to lobby for governmental policy changes, expose human rights violations and encourage their respective citizens to cross the barrier and reach out to the other side. They need international and local approval, financial support and community involvement” And she concluded, “Although youthful innocence can never be regained, hope and humanity have a chance for restoration by allowing time for healing, engaging in compassionate dialogue, reconciling through support of rebuilding efforts, reaching mutual accord and applying new policies and agreements.

They must be ventured for and won, with determination and, above all, speed. After all, worse can always follow even the worst we have seen. Therefore, there is no time to lose.” Bahiri’s Brainchild The contest was the brainchild of Bronx-born Dr. Simcha Bahiri, a member of the Palestine-Israel Journal editorial board, who at the young age of 82, after working with the Ford Foundation in Africa, the Armand Hammer Economic Peace Research Center at Tel Aviv University and with Prof. Seymour Melman at Columbia University on economic conversion (that’s just the abbreviated list), is still coming up with new, innovative ideas. "This prize is dedicated to young creativity about issues related to peace and understanding," said AbuZayyad, who was one of the evening moderators together with journal co-editor Hillel Schenker. Yet, the reality of the occupation shadowed the day in which Israeli and Palestinian youth convened together in an open dialogue toward peace, as Palestinian contestant Rami Samandar from Ramallah had problems receiving a permit to come to Tel Aviv, and was unable to attend. 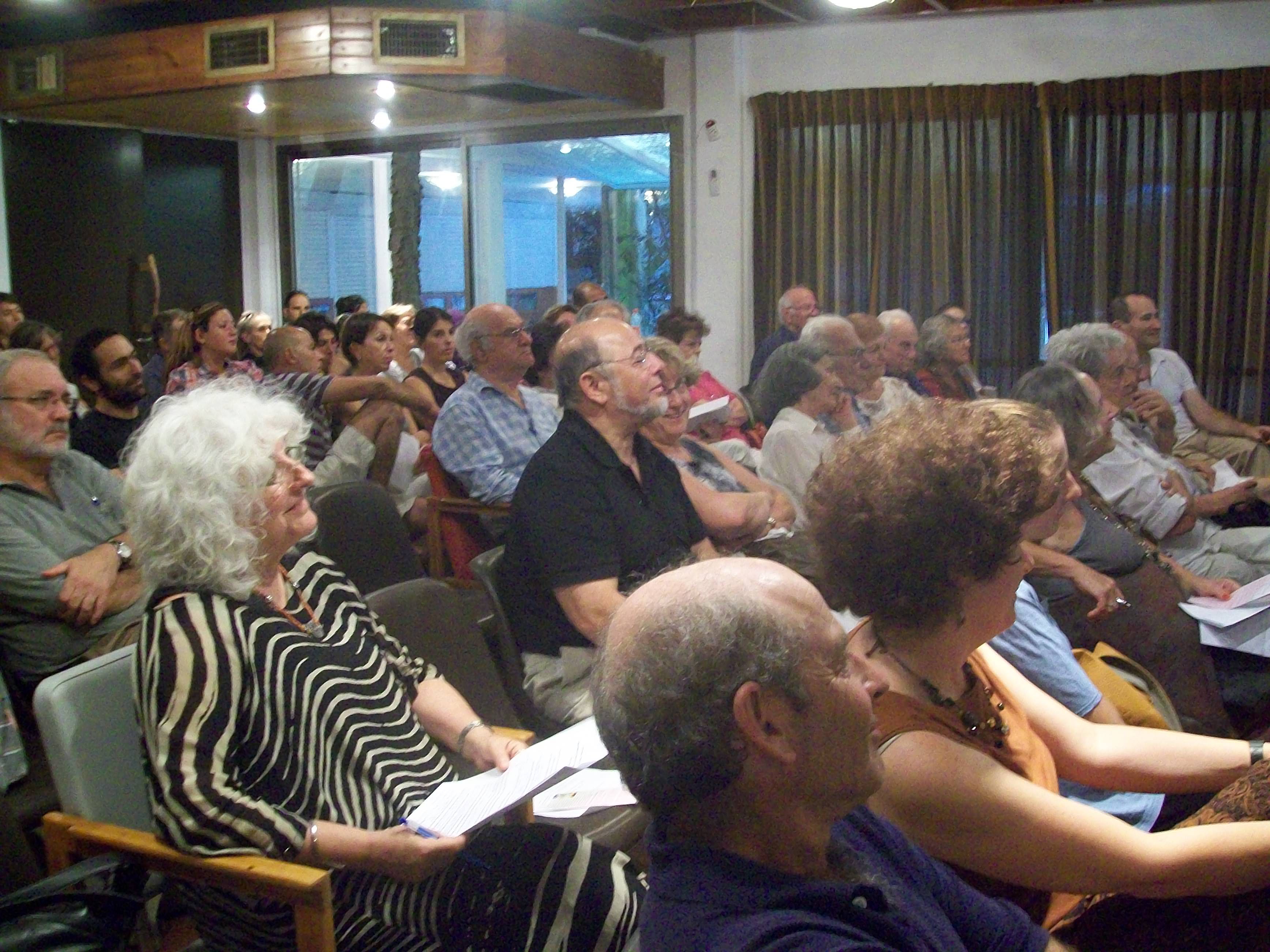 The Palestine-Israel Journal is a non-profit organization, founded in 1994 by Ziad AbuZayyad and the late Victor Cygielman, two prominent Palestinian and Israeli journalists, and was established concurrently with the first phases of the Oslo peace process to encourage dialogue between civil societies on both sides and broaden the base of support for the peace process. The PIJ, which is based in East Jerusalem, is the only joint independent publication to be produced locally and it is published quarterly. Remembering Victor Cygielman: A Rare, Courageous and Modest Individual The award ceremony, which also served as a tribute to Cygielman, was a combination of inspirational stories and anecdotes, lighthearted humor and melodies from the acoustic guitar of Israeli musician Danny Amir. Cygielman’s youngest daughter, journalist Anat Cygielman, read some relevant words her father wrote in Hebrew after the Six Day War of 1967, in which he warned about the potential dangers involved in the question of how Israel would relate to the newly occupied territories. Cygielman paraphrased Marx, saying that "a nation which represses another nation cannot be free."

Ambassador Avi Primor, who served as Israeli ambassador to the EU and Germany, described how he originally viewed Cygielman as a dangerous critic of Israeli policy, and eventually learned to appreciate his honest dedication to the facts, particularly connected to specific instances of the use of torture by the IDF which could not be contradicted by the Israeli authorities. Primor grew to see him as “an authentic Israeli patriotic and a really rare courageous man. I think our job is to see to it that there will be many more Victor Cygielmans,” he concluded.

Prof. Daniel Bar-Tal of Tel Aviv University, Cygielman's successor as Israeli co-editor at the journal, remembered him as a unique person who embodied the virtues of wisdom, modesty and sensitivity and commented on the importance of youth. Making a connection between a tribute to the past and the future, he said that "the Simcha Bahiri youth essay contest is one of the few lights in the darkness we live in today," he said. "It shows that there are young people, who in spite of the darkness are able to provide hope by seeing not only the dead-end way that the present society is going, but also offer an alternative direction."

Youth, the key to the future Young people from Jenin, Tel Aviv, Tulkarem, Beersheva, Nablus , Jerusalem (West and East), Tiberias, Rehovot, Galil Yam, Ramallah, Rosh Ha’ayin and Hebron participated at the ceremony. AbuZayyad acknowledged the efforts Palestinian youth put into obtaining the permits to travel from the West Bank to Israel. "It wasn't easy but they were really persistent and stubborn," he said. Khadrah Jean Jaser AbuZant, 19, from Tulkarem and Maya Wind, 19, from Jerusalem won the first prize of $1,000 cash each, donated by PIJ editorial board member Dr. Simcha Bahiri. Israelis Neriya Mark and Naomi Mark (yes, they are sisters) and Palestinians Zain Masri and Omar Nada won the second prize. The other participants in the competition were Jeries Basir, Karnit Malka, Jalla’ Majid Abu Arab, Chen Amram, Raba’a Ibrahim Sallah, Gal Amram, Jawida Mansour, Hofit Raz, Rami Samandar, Lipaz Ben-Yitzhak, Mahmoud Jabari, Reut Cohen, Majd Muhammad Husei, Merav Cohen and Ofek Ravid. They were all presented with a PIJ contest certificate. Although Rami Samandar did not make it thorough the checkpoint, family members and friends of the other participants clapped their hands when AbuZayyad announced his name.

Gender Equality Participants also received a copy of the book Portraits of 30 Palestinian and 30 Israeli Women, which were donated by Peace X Peace founder Patricia Smith Melton and Elana Rosenman, co-director of Women's Interfaith Encounter in the Middle East. PIJ Co-Editor Schenker noted that Prof. Galia Golan, a PIJ editorial board member who was unable to attend, would have been upset to see so many men at the speakers table. “But she would have been heartened by the fact that the two first prize winners and three of the four second prize winners are young women, demonstrating that there is clearly hope for the future.” Schenker and AbuZayyad encouraged students to continue the ongoing exchange and dialogue through e-mails and meetings, which will be facilitated by the PIJ "All we are saying is give peace a chance," sang Danny Amir at the close of the ceremony, adding a few words of his own, one of them being “Obama.” 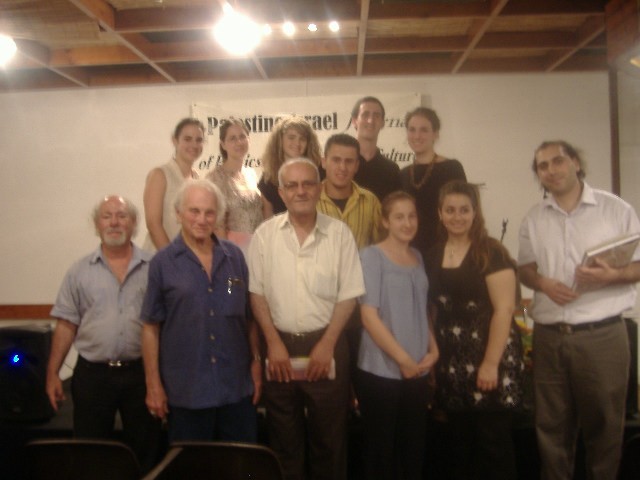 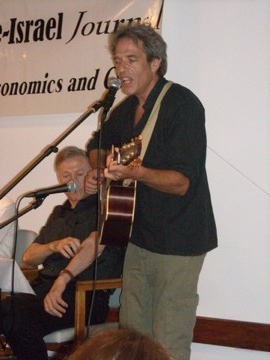 The two leading essays will appear in the next issue of the Palestine-Israel Journal. The necessity of doubt Maya Yechieli Wind Exposure to a diversity of information would encourage greater skepticism of the way their respective societies represent the conflict. If our leaders can't do it Khadrah Jean Jaser AbuZant When healing, engagement and reconciliation have taken place, the next step is to reach an accord. Yossi Sarid's greeting to the participants in the Youth Essay contest