“Lords of the Land” – Debating the impact of the Settlements

Talia Sasson, former head of the Special Tasks Division in the State Attorney’s Office, and Suhail Khalilieh, head of the Applied Research Institute’s Monitoring Settlements Unit in Jerusalem, joined Ha’aretz writer and author Akiva Eldar to discuss the implications of Israel’s settlement policy on the West Bank, Gaza and Israel. The discussion marked the English publication of Lords of the Land: The War for Israel’s Settlements in the Occupied Territories, 1967-2007 by Eldar and Prof. Idith Zertal. The event was organized by the Palestine-Israel Journal, together with the Yakar Center for Social Concern, and was moderated by Yakar director Benjamin Pogrund and introduced by Palestine-Israel Journal co-editor Hillel Schenker. Eldar began the night with a question: “Are the settlements making Israel more Jewish?” His answer, unequivocally, was no. “The settlements,” Eldar said, “are the greatest threat to Zionism. I would even say they are post-Zionist.” To elucidate this point, Eldar systematically showcased how the settlement project contradicts the ideals of a Jewish, democratic, just and peaceful state, as outlined in Israel’s 1948 Declaration of Independence. Given the demographics of the Occupied Territories, Eldar said, Israel is already a “bi-national state” that has lost its Jewish character. For Eldar, the “clear discrimination between Arabs and Jews” in the West Bank, specifically with reference to resource distribution, belies Israel’s just and democratic nature. Additionally, the military divisions in the West Bank protect settlers, not the state from any existential threat. This security apparatus for West Bank settlements, noted Eldar, costs an exorbitant $6.5 billion and may have caused Israel’s poor showing in the summer 2006 war in Lebanon. 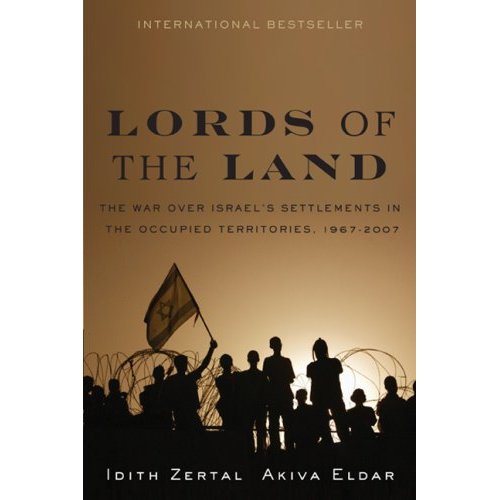 Eldar noted former Chief Rabbi Abraham Shapira’s answer to the question: What happens if a commander orders a soldier to evacuate a Jewish settler? “The prime minister is not the boss,” Shapira responded. “The boss is the almighty God.” “If this is democracy,” said Eldar, “Iran is a democracy.” Not only burdening Israel, the settler movement has failed to make an extensive Jewish presence in the West Bank, said Eldar. The settlers comprise only 12% of the West Bank’s population and 4.5% of Israel's. Despite their limited, though expanding, numbers, settlers remain an impediment to peace. The separation wall, road blocks and continued occupation disrupt the possibility for a viable, contiguous Palestinian state. “Is it still possible to save the Zionist dream?” asked Eldar. He believed, yes. With Annapolis, Ehud Olmert could freeze settlements and begin moving Israel down the path to a two-state solution. Talia Sasson, former head of the Special Tasks Division in the State Attorney's office and author of the “Outposts Report,” reaffirmed her recommendation to the Ariel Sharon government: Outposts are illegal, she said, “if you cannot build legally, don’t build at all.” Outposts, which are built “behind the back of the government,” according to Sasson, differ legally from settlements, which, she asserted, are illegal according to international law as understood by most states. Sasson added that Israel’s Supreme Court of Justice has also declared the occupation of the West Bank temporary until an agreement with the Palestinian people is reached; thus, implicitly recognizing what Sasson believes to be fact: Israel has no legal sovereignty in the West Bank. Despite this, Israel has reneged on its agreement with the Untied States to evacuate all outposts and not to build beyond the construction lines of the settlements. Sasson cited a recent Ministry of Justice report affirming settlers’ right to expand settlements without government approval. It also recommends a special committee to finance outposts with government money despite their illegality. This stands in conflict with international law, Sasson said, and indicates a clear non-implementation of the “Outposts Report.” Suhail Khalilieh, from the Settlement Monitoring Unit of the Applied Research Institute in Jerusalem, spoke directly to the impact of settlements on the Palestinian population, both in Gaza and the West Bank. “Settlements are in violation of international law,” he declared definitively. “This is indisputable fact.” Israel’s settlement program, instituted in 1967, aims to colonize the West Bank, Khalilieh said, and to prevent the emergence of a Palestinian state. Khalilieh maintained that Israel’s discriminatory building policies replicate those of Apartheid South Africa. “Settlements are allowed to build freely,” he said, “While Palestinians cannot even cope with the growth of their own population.” According to the Applied Research Institute’s satellite surveys, there are 199 settlements in the West Bank, inhabiting 3.3% of the land, alongside 220 outposts. With East Jerusalem included, 500,000 settlers reside in the Palestinian territories. “Without the settlers,” said Khalilieh, “the Israeli army would just be an occupation.” Similarly, the Gaza disengagement barely dented Israel’s control over the strip, according to Khalilieh. An expanded buffer zone along the border of Gaza created in conjunction with disengagement, allows Israel to maintain control over 24% of the land. This down only from 37% control when Israel formally occupied the strip. The reality in Gaza combined with the various mechanisms of control in the West Bank, including road blocks, checkpoints, tunnels, terminals and gates all signify Israel’s desire to prevent a contiguous and viable Palestinian state, according to Khalilieh. “Palestinians ask for 22% of the British mandate,” said Khalilieh. “This is much less than the 45% that was originally promised us.”

The evening's panel speakers. From left to right: Suhail Khalilieh, Benjamin Pogrund, Talia Sasson, and Akiva Eldar.
The panel presentations were followed with a lively question-and-answer session that drew questions from across the political spectrum. Excerpts from the discussion: I want to note that the expositions have been one of the propaganda of the enemies of Israel. The right of the Jewish people to closely settle the land is established in the Palestine Mandate of the League of Nations. Also, the Geneva Conventions say that the relationship of occupier and occupied can only be between two high contracting parties. Are you aware of these facts? Eldar: It’s very clear that settlements contradict the definition of a Jewish state. According to international law and official Israeli policy that accepted 242, Israel has to withdraw to the 1967 borders with minor modifications. What I suggest to this gentleman, if he wants to be post-democratic and Jewish, let’s start with asking: Why didn’t the Likud governments annex the territories? They could have annexed the territories if it was given to us by God, and then allow the Palestinians to vote – one man, one vote. Otherwise it’s South Africa. If you want to live in South Africa, you’re welcome. I agree that settlements are the greatest enemy of Zionism. I came to this country because I consider myself a Zionist in the tradition of the declaration of independence. Maybe this sort of Zionism doesn’t exist anymore. I hope it does. Do you consider in 2007 Israel to be an apartheid state? Eldar: I think Israel is bad enough without this title of apartheid. If you know a little bit about the history of South Africa, we don’t have segregation laws. People talk about “apartheid roads,” but if you want to be precise, Israeli Palestinians and Muslims can use these roads. It's not on the basis of race. It's on the basis of political – demographic, if you’d like – conflict between us and the Palestinians. I think that most Israelis would like to see an end to this, but there was a military conflict that we can’t ignore, unlike in South Africa where it was based on color. Here it was based on a war that you can argue Israel didn’t start. It’s not South African apartheid, but things are pretty bad without the title. A lot of the focus is on the land. I think that a lot of people in this room are concerned about terrorism. Hamas is killing Fateh, Fateh is killing Hamas, and when they don’t get to kill each other, they try to kill Jews. If Palestinians would get the land that they want, what would they do with it? Would they shell Tel Aviv and Haifa?