Vol. 13 No. 3   2006
An interview with the Damascus-based head of the political bureau of Hamas

Khaled Mash'al: First, we, in principle, are determined not to yield to the conditions of the Quartet because they are unjust and biased. Second, we are opposed to tying our fates to the conditions of our enemies. How will we deal with the international community? This is a different matter, but it is not possible to bind our internal affairs and destiny with conditions imposed on us by our enemies. Third, the Quartet conditions are not new. They have been on the table for a long time; there are those who have recognized them, but what have they obtained? Nothing. In other words, those Palestinian and Arab parties that have accepted these conditions have not achieved anything on the ground. Why should we replicate these experiences, especially since they lead to a dead end?

Then you reject the Quartet's conditions and the Arab initiative?

But the Qatar initiative incorporates a formulation of the Quartet's conditions, like the recognition of a two-state solution and the signed agreements.

It is the prerogative of Sheikh Hamad [the Qatari foreign minister, Hamad ben Jassem al-Thani] to come up with an initiative and to try to broker a peace agreement. We welcome any Arab effort, but, in the end, we are going to deal with all these efforts based on whether they take into consideration two issues. The first is the interests of our people, because we are entrusted with that. The second is the achievement of the greatest possible degree of political concord with the other political forces, in order to form a national unity government and to join efforts to extract our rights from the enemy.

Do you accept a solution based on two states - Israeli and Palestinian - according to President George W. Bush's vision?

Do you concur with the words of Prime Minister Ismail Haniyeh: a Palestinian state within the 1967 borders and a hudna (truce)?

This is a position presented by the movement and accepted internally. The movement accepts a state within the 1967 borders and a hudna.

With hudna, because our position is not to recognize Israel. There are those who accuse us of not being realistic. There is a difference. Israel does exist in actual fact, and I am asked to give it legitimacy and to recognize that legitimacy.
Realism does not mean recognizing the legitimacy of the occupation. An entity exists; this is a reality, but as a Palestinian, I am not supposed to recognize the legitimacy of the occupation. Also, why am I required to legitimize the occupation of my land, when millions of Palestinians come from the land upon which this entity was established? There is an entity called Israel. Yes. But recognizing it is not my concern.

You are not interested in recognizing Israel, but do you accept the agreements?

We deal with the signed agreements and the existing ones on the ground in accordance with the interests of the Palestinian people. If they serve my people, then I'll implement them. 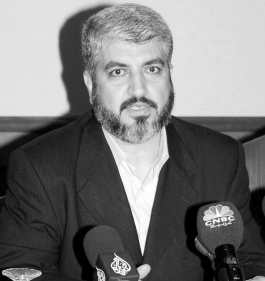 I won't go into details. There have been many agreements since Oslo up to now. The important thing is to refer to the criterion: Do they promote the interests of the Palestinian people? Furthermore, why be so hard on us? We are expected to implement the agreements to the letter and to praise and glorify them, while the other side - who also signed the agreements - can choose what it wants to implement and when? Why must we abide by all the agreements while they can be selective? It is our right as Palestinians and as a government (irrespective of which one) to tackle these agreements in a way that is realistic, and that takes into consideration the general good and the balance of power. As I said, the yardstick should be the interests of the Palestinian people.

What about "renouncing terrorism"? Sheikh Hamad's initiative includes such a clause.

We do not consider what we practice terrorism or violence. It is legitimate resistance, even according to international law. Thus, I do not accept any formulation which intimates that I am censuring myself. The one guilty of terrorism and violence is the aggressor. And it [Israel] is using all kinds of terrorism against the people, the land, the holy sites, and the trees.
Hence, I affirm my right to resist. As long as my people are dispossessed and my land occupied, it is my legitimate right to resist the occupation. As for terrorism, it is a contrivance that has been exported here from the outside. What gave rise to terrorism and provided it with fertile ground are the American injustice and the Israeli aggression.

This means that the siege will go on. You are asking the Palestinian people to remain steadfast, and they are suffering.

A people that strives to liberate its land, to achieve freedom, self-determination, and independence, and to get rid of occupation has to be patient. The Palestinian people have no recourse other than steadfastness, patience, sacrifice, and resistance to achieve their rights. Whoever thinks Hamas is hard on its people is mistaken. This is our fate - with Hamas or with anybody else.
We are not imposing anything new on our people. On the contrary: We are an outgrowth and a part of the people, and we interact with all the forces. So far, no one has handed us our legitimate rights through peaceful means. Had the international community offered us ways to acquire our rights without resistance, we would have taken this road, because resistance is a means and not an end.

There are those who say that Mash'al calls for steadfastness from his cushy position in Damascus and the Palestinian people are paying the price.

This would have been correct had the Palestinian people in the territories had any other choice, and Khaled Mash'al and the leadership in the outside had called upon them to act differently. The truth is otherwise. Our people in the interior chose steadfastness and resistance. They don't need anyone to teach them that. We are one people, and we are all suffering.

It has been said that Mash'al is behind all the problems: hindering the exchange deal for the prisoner Gilad Shalit, the national unity government, and the initiative of Sheikh Hamad.

And what did they say after the speech of Ismail Haniyeh? Why are they pouring their anger upon him? This is a game; they are trying to personalize the political positions. They know that Hamas is a political institution. When a position is expressed through a leader - whether in the interior or the exterior - it is the position of an institution and a movement that is being conveyed.

But you are accused of intransigence. And there is also talk that Syria is preventing you from showing any flexibility.

Why do they say that? The aim is two-fold: One, to cause the fragmentation of Hamas's position and the isolation of the movement in the interior; and two, to pressure Damascus and hold it responsible for something of which it is innocent. We have an example: When Israel scuttled the negotiations, whom did it blame? The late President Yasser Arafat. Why? Because it wants to throw the responsibility on some other party; whereas the real culprits are Israel and America.

The Secretary of State Condoleezza Rice is betting on fissures in Hamas.

What hostile logic! In order to jumpstart the negotiations, it is necessary to destroy the other [Hamas]. In the past we were told that the peace process won't advance except with the departure of Arafat. Arafat is gone; has the process advanced? The lie repeats itself, and they refuse to face the fact that the people of the region have wised up to their game.

What if President [Mahmoud] Abbas calls for elections after dissolving the government and parliament?

We'll cross that bridge when we come to it.

Will you take to the streets and resort to weapons, or will you use constitutional means?

We will act accordingly when the time comes. We will measure our response according to whether the action was constitutional or not.

You do not accept the Quartet's conditions; then the option is rejection and resistance?

Yes, and to knock on all doors.

But Hamas has committed to tahdi'a (calm) with Israel for about two years.

Yes. This was within the context of our efforts to find a way to achieve our rights.

What about the exchange deal - Gilad Shalit for 1,000 prisoners? It is alleged that Syria is hindering the deal from going through.

There are certain equivocations here: First, accusing Syria of pushing Hamas into hardening its position, and accusing us of adopting a hard line. The decision about the Israeli soldier is not taken in Damascus or any geographical location. The decision depends on the movement's position. Second, Israel so far has rejected the principle of exchange.

Is it true that the offer is to release Shalit, which is to be followed by the release of children and women?

Yes. When Shalit is released, Israel will set free detainees within a certain political context and through certain meetings which will turn the whole process into an example of Israeli generosity. To date, Israel has not accepted the exchange deal, and the one blocking an agreement is Prime Minister Ehud Olmert with his obstinacy.

Does Mash'al know Shalit's whereabouts and the condition of his health?

We do not get involved in such matters. There are parties that deal with that. Our concern is the political condition and the position of the movement in dealing with this issue - not the details.

Is there a fear that Olmert will exact vengeance on the Palestinian people once Shalit is released?

This is not the governing factor with respect to the exchange deal and Shalit's release. The main element is to secure the release of the greatest number possible of Palestinian and Arab prisoners - men and women. What is being asked is the release of 1,000 prisoners, in addition to the women and children. The issue of prisoners is a sensitive one. It is both a humanitarian and a political one. We have 10,000 prisoners. This is a national concern. No one has the right to be lenient in this respect.

Excerpts from an interview published in Arabic. Translated into English by the Palestine-Israel Journal.