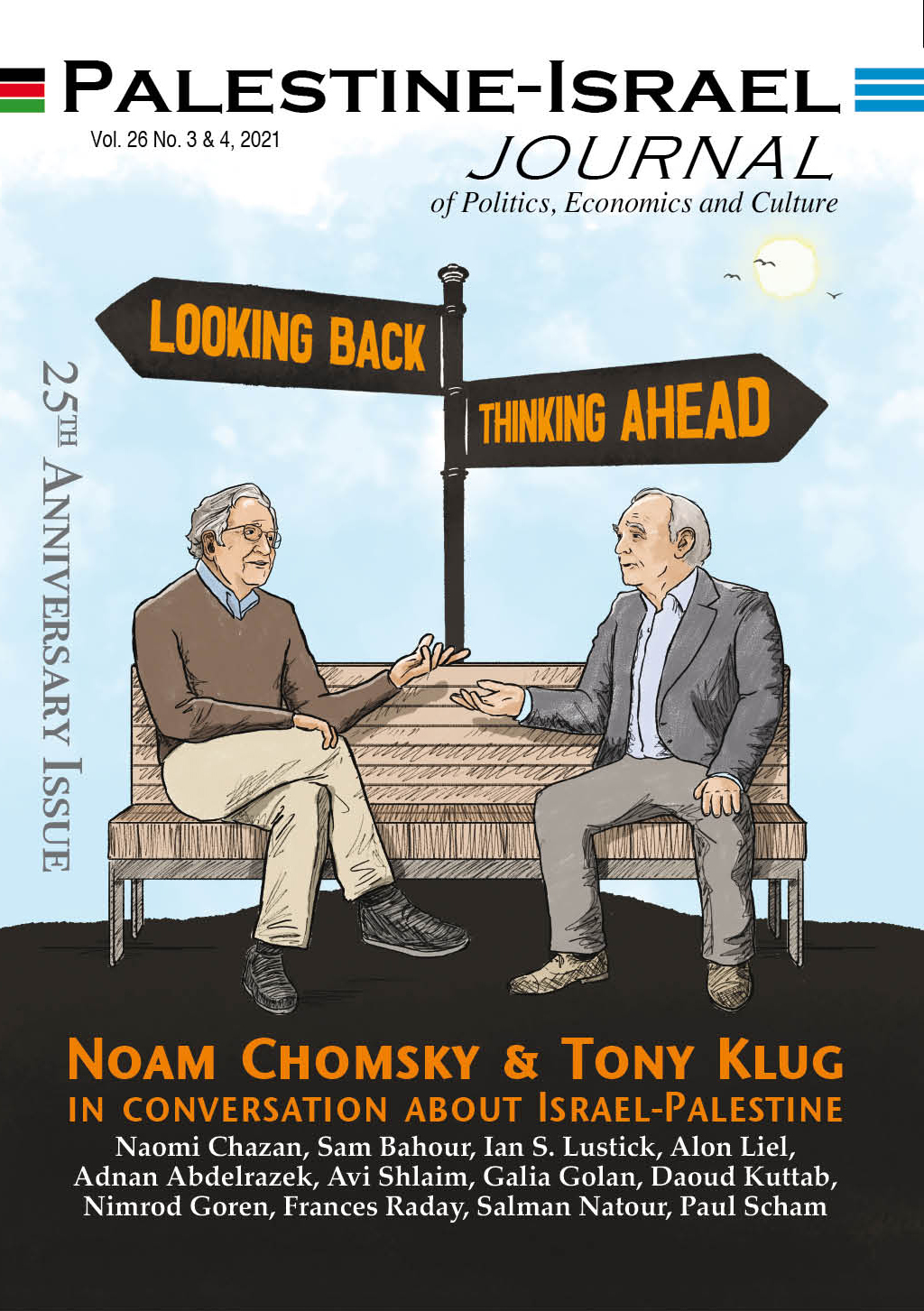 Sam Bahour
Sam Bahour is a Palestinian-American business consultant from Ramallah/Al-Bireh in the West Bank and is co-editor of Homeland: Oral Histories of Palestine and Palestinians (1994). He blogs at ePalestine.ps. @SamBahour

This edition of the Palestine-Israel Journal presents a fascinating exchange—dare I term it a debate—between two acclaimed analysts, Dr Noam Chomsky and Dr Tony Klug. Dr Klug and I co-authored opinion editorials in the past, among other interactions. Sparked by an article by Dr Klug about former President Trump’s “vision” for Palestinian-Israeli peace, the two entered into an exchange for over one year. As is always the case when engaging with either of these analysts, one always walks away learning something new. This was the case in this exchange as well.

Their conversation dealt with many aspects of the Palestinian struggle for freedom and independence but can be summarized as addressing the history, politics, and what needs to be done moving forward.

Although not always agreeing on the details, they highlighted the key elements to understand where we are today. With every exchange I found myself oscillating between supporting both of their views.

On history, Dr Chomsky is right that Israel chose “expansion over security” long ago,” and Dr Klug is right in noting that in politics one has a duty, regardless of either side’s poor choices, to find the openings, no matter how slight, to leverage to create new realities.

Likewise, on what needs to be done, Dr Chomsky is right in noting that without a Palestinian-led global solidarity movement that is political in nature, the U.S. scene, where he believes will be the source of any serious shift in reality, will not happen. Dr Klug is equally spot on when he argues that the international community, to date, has been a huge part of the problem in acquiescing to the Israeli military occupation, while simultaneously being the body that has the power to move Israel out of its self-defeating and illegal intransigence.

While much of their conversation focused on what Israel did or did not do, below I contribute to what the Palestinians did and how the international community, led — or should I say hijacked — by the United States reacted to Palestinians’ never-ending “generous offers.”

Because of its obsession with supporting Israel at any cost, America never misses an opportunity to miss an opportunity. This was never more apparent than when President Donald Trump’s Middle East hit team bulldozed forward with what was coined the “Deal of the Century.”

The hit team comprised three corporate lawyers, all with no relevant political or diplomatic training or basic historical knowledge of the area they were addressing. All three are proud public cheerleaders for the school of political thought of the most extremist elements in Israeli society, that of the likes of Yigal Amir, the Jewish extremist who on November 4, 1995, assassinated Israeli Prime Minister Yitzhak Rabin for entering the Oslo “peace process.” One team member, in particular, was David Friedman, Trump’s bankruptcy lawyer whom he appointed as U.S. ambassador to Israel. He is a material supporter of the Israeli settlement next to my house, the Beit El settlement.

From the presidential campaign trail, Trump began beating his war drum against Palestinians. From his first day in office, his approach to the Palestinians resembled that of a bull in a china shop. Unlike the Trump’s team false claim that the “economic workshop” held in Bahrain would be the first step in a two-part revelation of the “deal,” reality proved very different. The implementation of this deal was well underway before its announcement and continues without formal approval from the major stakeholders, namely the Palestinians.

This “Deal of the Century” rapidly became the “Traveling Circus of the Century.” The point person for the deal, Trump’s son-in-law Jared Kushner and company trotted around the region trying to sell economic wares supposedly aimed at upgrading Palestinian livelihoods, all the while ignoring the Palestinians themselves. Having implemented the deal’s political elements before any formal announcement, the U.S. did not give itself even a fighting chance to succeed, assuming it wanted to advance peace. This episode of U.S. intervention in the Middle East will be taught for many years to come to political science and diplomacy students as an example of what not to do in their careers.

What is utterly pathetic is that there really was an opportunity to seize the moment to significantly advance peace between Palestinians and Israelis. Dishing out some tough love to its strategic ally, the U.S. is well-positioned to pull rank on Israel and bring the over five-decade military occupation to an abrupt end. However, the U.S. is yet again totally misreading reality and overstepping its declining influence around the globe, especially in the Middle East.

The history is long, but a few highlights are all that are needed to make the point.

A History of U.S. Bungles

In 1977, President Jimmy Carter’s National Security Advisor, Zbigniew Brzezinski, infamously remarked "Bye-bye [Palestine Liberation Organization] PLO" when interviewed by the French-language weekly news magazine Paris Match. This happened as the backdrop to the Lebanese civil war, in which the Palestinians were being attacked and as Egypt’s President Anwar Sadat made his visit to Israel, breaking ranks with the Arab world. This wishful thinking that the Palestinians’ political agency, the PLO, would disappear proved to be a missed opportunity like no other. A mere 20 years after this blunder was uttered, the PLO and Israel would be sitting on the White House lawn launching the Oslo “peace process.”

In 1982, Israel began the devastating Lebanon War, aimed at destroying the PLO once and for all. The U.S. backed Israel in this war, armed it and diplomatically covered for it as never before. Instead of being destroyed, the PLO was forced to leave Lebanon, only to return months later. A byproduct of this U.S. blunder was the creation of the militant group Hizbullah.

In 1987, frustrated Palestinians living under decades of Israeli military occupation rose up in the first Palestinian intifada, challenging Israel with civil disobedience, general strikes, and community organizing, all mixed with a high dose of nationalist culture and arts. With 24-hour cable news now gaining popularity, the world started to see what the occupation looked like from the inside. This was an ideal moment for the U.S. to step in and use the opportunity to get its ally Israel to end the occupation. It didn’t and failed again. A by-product of this U.S. blunder was the creation of Hamas.

In 1988, in a strategic attempt to translate the global traction the first intifada had gained, the PLO—by a vote of 253 in favor, 46 against, and 10 abstentions—issued the Palestinian Declaration of Independence, formally accepting the partition of historical Palestine into two states, Palestine and Israel. Another opportunity like no other presented itself here, given the fact that Palestinians living under occupation and their political agents outside of the country were all aligned. The U.S. missed the boat again.

The head of the PLO at the time refused to give up. In November 1988, Yasir Arafat was invited to speak at the UN General Assembly session in New York, promising to raise on the global stage the dire need for the powers that be to understand that the Middle East cannot rest as long as Israel’s boot of occupation remains pressing on the Palestinians’ neck. Instead of welcoming this overture, the Reagan administration denied him a visa, causing a special session to be held at the UN building in Geneva. Another missed opportunity.

There was one respite from U.S. blindness, but it was short-lived. In December 1988, in a surprising reversal of the U.S. diplomatic boycott of the PLO, Secretary of State George P. Shultz announced that the U.S. was ready for “direct talks” with the PLO. Arafat’s insistence on speaking at the UN achieved its goal.

In 1993 the PLO went further than ever before by taking the first step in the Oslo “peace process” by directly recognizing the state of Israel, a colossal political concession. In its turn, Israel replied by recognizing the PLO, not the state of Palestine. The U.S. ignored these mismatching recognitions and pressed on, allowing Israel to negotiate while expanding its illegal settlement enterprise, all the while benefiting from U.S. military aid and diplomatic cover for decades. Meeting after meeting, workshop after workshop, conference after conference, pledge after pledge, and statement after statement—all to no avail. The U.S. fumbled its way through two decades of negotiations, failing not once, but multiple times.

When it was clear that the Oslo “peace process” had failed, the PLO offered yet another historic opportunity to resolve the conflict. On Nov. 29, 2012, Palestinians presented a resolution to the UN General Assembly requesting membership for the state of Palestine. The U.S. refused this approach, along with eight other countries (four of them U.S protectorate Pacific islands). The majority of the world voted yes and the resolution passed, affirming that “an independent, sovereign, democratic, contiguous and viable state of Palestine living side by side in peace and security with Israel on the basis of the pre-1967 borders” was the goal. Reminiscent of its failure to join the world at the peak of the struggle against apartheid in South Africa, the U.S. failed again to see this prime opportunity to act in good faith to end the occupation and allow the two-state solution to be realized.

What a coincidence that just as Palestine was gaining traction as a state on the global stage, with more than 135 countries recognizing the state of Palestine, the U.S. decided to change the game and trash international law for the clandestine activities of three corporate lawyers, who, by the way, left the entire foreign relations institution in the U.S. in the dark.

When the Palestinian leadership—even with its weak domestic standing—keeps its hand extended for a resolution of the conflict based on a two-state solution, long after the Israeli side has made it abundantly clear that they are not interested in ending their 54-year-old military occupation, the U.S. refuses to register the opportunity.

Enter the presidency of Joe Biden.
Most sane onlookers believed that the defeat of Trump would be the last chance before Israel imposes a one-state reality from the Mediterranean Sea to the Jordan River which is irreversible and will be the beginning of the end of Israel, as it is known today. Biden had a choice to act; he failed to do so. Although he acted to reverse many of Trump’s catastrophic policies, Biden failed to change Trump’s illegal path on Palestine-Israel which blindly bear-hugged Israel’s right-wing extremist strategy.

One asks, where is the U.S. deep state? Even more importantly, one asks, where are the adults in the room in Washington, D.C.? Could it be that all—including Biden’s administration—are aligned with Trump’s attempt to liquidate the Palestinian struggle for freedom and independence? This is hard to believe, and one wants to give U.S. lawmakers the benefit of the doubt and recognize that they, too, like Palestinians, are under the influence of Israeli military occupation. In their case, their political careers are on the line if they dare to choose U.S. strategic interests over Israeli extremist interests.

Indeed, America never misses an opportunity to miss an opportunity to bring peace to the Middle East. Palestinians and Israelis are ultimately paying the price now that the Trump hit team are back in their corporate law offices. Sadly, history is an indication and Palestinians are bearing the lion’s share of the death toll, to the tune of approximately 1000 to 1; let there be no doubt that all 1001 lives could and should be spared!