Roundtable Discussions   |  Book Reviews   |  Culture, Literature and Arts  |  Economics   |  Policy Papers  |  Interviews  |
There Is No Other Solution
By Shaul Arieli 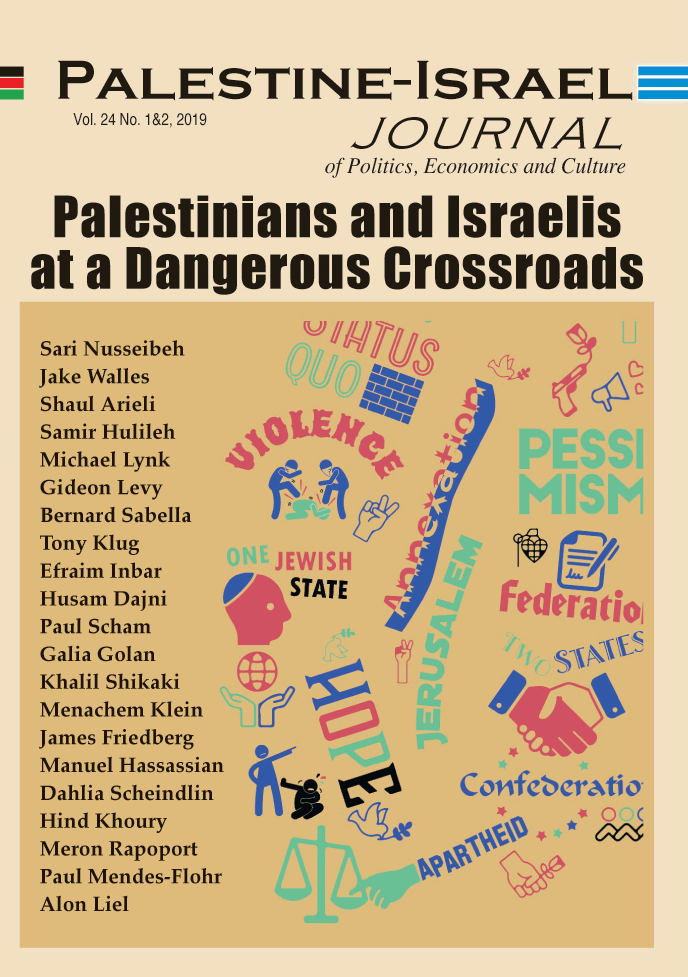 Shaul Arieli
Dr. Shaul Arieli teaches at the Hebrew University of Jerusalem and Reichman University, and a research fellow at the Truman Institute. He is the author of A Border Between Us and You (2013) and All of Israel's Borders (2018), the Truman Institute Atlas for the Jewish- Arab Conflict (2021) and “How Exactly Did it Happen? 12 Israeli Myths about the Israeli-Palestinian Conflict” (2021). Arieli has dedicated himself to advancing an Israeli-Palestinian permanent-status agreement and was among the leading negotiators in the process that brought about the Geneva Initiative in December 2003. He headed the Peace Administration in the Ehud Barak government and served as a colonel in the IDF.

In recent years we have witnessed the publication of various ideas for resolving the Israeli-Palestinian conflict which are not based on a two-state solution: federation and confederation. Their emergence is driven by two main working assumptions — first, that the mixing of populations between the Jordan River and the Mediterranean Sea undermines the feasibility of a two-state solution. In this view, the possibility of a two-state solution has finally been eliminated by the Israeli settlement enterprise in the West Bank, for Israel cannot evacuate the 30,000 families living in the isolated settlements and re absorb them into Israel. The second assumption is that the two-state solution cannot lead to the end of the conflict because of the affinity each of the two sides has for the entire territory and the need and the right of each side to move and settle in its entirety.

In previous articles in Haaretz and on my website (https://www.shaularieli.com/en/homepage-2/), I have refuted the first assumption with a systematic presentation of the spatial-physical feasibility of the twostate solution, in a scenario involving a 4% territorial exchange. Such an agreement would allow 80% of the Israelis living beyond the Green Line to remain under Israeli sovereignty, with the damage contained to reasonable and tolerable levels in three aspects: the contiguity and fabric of life of the Palestinian communities that will lose some of their land, the fabric of life of Israeli settlements whose land will be transferred to Palestine in exchange, and the fabric of life of the settlers who will not be included in the exchange of territories and will have to be re-absorbed into Israel.

Dealing with the evacuation and the absorption of 30,000 families requires national preparations, as determined in 2010 by the state’s commission of inquiry into the disengagement, headed by Justice Eliahu Mazza:

The most important lesson of the commission of inquiry is to instruct the Prime Minister to plan today a comprehensive national plan for a possible evacuation of 100,000 people from the West Bank in order to reduce personal, collective and national trauma, save costs and absorb people in the responsible and proper manner, as this country absorbed a million immigrants in the 1990s.

In this context, Israel must practically prepare itself for two challenges: jobs and housing. Under such a scenario, during the evacuation phase, Israel must create about 20,000 new jobs over five years (it should be remembered that 60% of the Israeli workforce in the West Bank works within Israel). This is a marginal challenge, because today Israel creates more than 80,000 new jobs each year.

Four in-depth studies conducted in recent years to locate housing potential in Israel have found that there is potential for the realization of 100,000 new housing units within three years in areas relevant to evacuated Israelis.

It should be emphasized that there is currently no political will for implementing such an agreement, both because of the split in the Palestinian political sphere and the entrenched position of the Israeli government. As former U.S. Secretary of State John Kerry described it in November 2017 in Dubai: “Most members of the Cabinet of the current Israeli government have declared that they would never be in favor of a Palestinian state.” However, the lack of political viability for a two-state solution does not make the ideas of federation or confederation viable. Implementing these solutions would be like attempting to extinguish a fire with gasoline.

Because none of the conceptual thinkers supporting the federation and the confederation models has bothered to publish a detailed plan that can be tested by scientific standards — only general principles have been published so far — the differences between the various ideas raised cannot be addressed.

Every possibility of federation and confederation will have to be analyzed on many levels — security, political, historical, religious, social and so on. I will focus here on the socio-economic level, in order to examine whether it would possible to avoid a full political division between the two societies and a border between them in the form of a physical barrier.

First, let us use the socio-economic index of localities in Israel published by the Central Bureau of Statistics. If the border between the two political entities passes along the 1967 lines, except for the Jewish neighborhoods in East Jerusalem, as regards the “Jewish state,” we receive the grim picture that we are witnessing today. In the lower third (clusters 1-3) are located 9% of the 170 Jewish localities, where 16% of Jewish citizens live; in contrast, 82% of 85 of the Arab authorities are in this third, with no less than 89% of the Arab citizens. In other words, the country is economically polarized by national affiliation.

In the “Arab state” the picture is opposite in terms of numbers, but similar in terms of polarization and gaps in favor of the Jews. The entire Arab population in the West Bank and Gaza (5 million), living in close to 1,000 localities, corresponds to the data at the bottom of cluster 1, where only 120,000 Jews are classified (in the ultra-Orthodox settlements Modi’in Illit and Beitar Illit adjacent to the Green Line), which constitute only 29% of the Jewish population in the West Bank.

Third, we shall examine the national infrastructures: Located in the “Jewish state” are all the air and sea ports (excluding Gaza’s fishing port), all the power stations, all the desalination facilities and the national water carrier, all the railway tracks, all the highways (except roads 60, 443), all nuclear reactors, all major industrial zones and all international trade centers. In other words, proponents of the models of federation and confederation see in their vision an Arab society of millions of poor people who enjoy freedom of movement throughout the country, albeit gradually, and live in peace and with no friction with a Jewish society that is ten times richer.

The impact of such a reality on the technology and industrialization of the Israeli economy would be devastating. The Israeli police has no chance of dealing with the expected number of property and drug offenses, even if it were to triple its manpower, and we would see the construction of ghettos that are fenced and guarded by private security companies. Confrontations between extremist gangs on both sides would become common, with the addition of “modesty patrols,” “guardians of racial purity,” and so on, with which the situation would deteriorate into civil war. “An Arab state” established in the West Bank and the Gaza Strip with a capital in East Jerusalem, or part of a confederation with Jordan, with Arab and international support, would have a higher chance of building its economy and maintaining a stable state alongside Israel than would a country whose Arab residents would serve as labor force for the “Jewish state.”

And as if that were not enough, the methods of absorbing Palestinian refugees proposed by the advocates of the federation or the confederation model would be highly problematic. Some consider that they should be absorbed into the Arab state alone, but others believe that it would be right to absorb a number of refugees into Israel — equal to the number of Israelis who choose to live in the Arab state. In this spirit, and in today’s data, if all Jews in the West Bank were to choose to live in the Arab state, Israel would be required to absorb some 400,000 refugees into its territory. In other words, those who don’t believe it would be feasible to absorb just 100,000 Israelis settlers (who are connected to their fabric of life in Israel) would be forced to absorb four times as many Palestinian refugees from Lebanon and Syria. If, as expected, most of the Jews (especially the ultra- Orthodox and the secular, who constitute 70% of the Jewish population in the territories) prefer to move to the Jewish state, implementing the ideas of a federation or confederation would be the height of Israeli foolishness. It would mean the loss of the central benefit that might have been derived from the idea of a confederation — refraining from evacuating a significant number of settlers.

A leadership that lacks the national responsibility necessary to resettle less than 1.5% of the Jewish population in the Land of Israel/ Palestine — including the use of force if required — to ensure the future of the state of Israel as a democracy with a Jewish majority, within secure borders, in the family of nations, would not be able to cope with the far greater challenges involved in realizing the idea of a federation or confederation, which would eventually lead to the creation of an Arab state.

The realization of the two-state solution — which must include some elements of confederation, for example, in the historic basin of Jerusalem — will not be easy and will require the commitment of both sides, as well as the Arab world and the international community. But there is no viable alternative to the conclusion on partition reached by the United Nations Special Committee on Palestine (UNSCOP) in 1947. The only component that needs to be updated is the population data:

The basic assumption behind the partition proposal is that the claims on Palestine, both of the Arabs and of the Jews, are both valid and cannot be reconciled. Of all the proposals that have been proposed, the partition is the most practical one … and it will allow some of the national demands and aspirations of both sides to be provided … there are now about 650,000 Jews in Palestine (currently 6.5 million), and 1.2 million Arabs (currently, some 7 million) different from each other in their way of life and in their political interests. Only through partition can these two opposing national aspirations come into real expression and allow both peoples to take their place as independent nations in the international community and the United Nations.

This article was published in Hebrew in Haaretz on February 8, 2019.