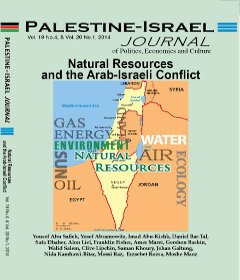 The conflict in the Middle East has always had natural resources in its background: land, water and oil. Strategists have asserted that the struggle over water might be at the heart of the next round of the Arab-Israeli conflict, while the recent discovery of new natural gas fields has added "fuel to the fire." At the same time, pollution and the environment are clearly cross-border issues - in the words of the title of one of the articles in this issue of the Palestine-Israel Journal (PIJ) focusing on natural resources, "Mosquitoes Don't Carry Visas." And when we look above us, we see a common resource shared by all in the region - the sun.

In this special issue of the PIJ, we aim to examine the topic from several aspects, including the legal, political and economic. What are the obligations of an occupying country regarding the preservation and protection of the rights of the occupied people to their own natural resources? To what extent is Israel abiding by international law and treaties, and to what extent is it violating these laws by exploiting the natural resources of the occupied territories? How could these resources be managed under occupation, and how could they be an issue of regional cooperation in a time of peace? How could we address cross-border issues, and how could we build a network of regional cooperation to protect the environment? What are the future prospects to develop, at a time of peace, the shared natural resources for the benefit and prosperity of all the peoples of the region?

The original working title for this issue was "The Natural Resource Challenge in the Middle East: Destructive Conflict or Political Settlement and Sustainable Cooperation." Our goal has been to create a basic resource tool which will serve as a handbook for all in the region and the international community who deal with these issues, as a potential building block for peace and regional cooperation. And of course, at the core of our concerns is the Israeli-Palestinian conflict and how it affects natural resources and the environment in the region.

The 15 articles in the Focus section, written by Palestinian, Israeli and international experts, and the interview with a former Palestinian minister of the environment, explore the sources of conflict that arise in the Middle East around natural resources. They raise questions about how to deal with those natural resources before, during and after concluding a political settlement to the Arab-Israeli conflict, and how to develop a process of cooperation and coordination between regional countries to use those resources as a foundation for political settlement and sustainability.

Given the war that we experienced this summer in Gaza, we added a special section to the issue that deals with "The Gaza-Israel Crisis: What Comes Next?"

There is a clear correlation between the two elements in the issue. Both the natural resource challenge and the recurring rounds of Israeli-Palestinian fighting are not just local questions between the two peoples - they have regional dimensions which require regional solutions.

This issue of the PIJ is our contribution towards advancing the process of regional cooperation over natural resources, and a general resolution of the Arab-Israeli conflict.