Mahmoud Okasha
Dr. Mahmoud K. Okasha is the head of the Strategic Research, Development Studies and Surveys Center at Al-Azhar University of Gaza and the head of the Department of Applied Statistics in the Faculty of Economics and Administrative Sciences. He is the former vice president for administrative and financial affairs at Al-Azhar and was part of the Palestinian team in the bilateral and multilateral meetings of the peace negotiations 1993-1996.
The Gaza Strip is one of the most densely populated places in the world. An area of less than 360 square kilometers is home to close to 1.5 million people, i.e., a population density of about 4,500 per square kilometer. It also has one of the highest population growth rates in the world - over 43.5 per 1,000.
Gaza's economy is largely composed of a small and fragmented industrial sector whose share of the total output varies between 6% and 12%, a very large service sector representing 45-60% of the total output, a large but fluctuating agricultural sector representing 20-35% of the total output, and a smaller construction sector representing 18% of the total output. Almost all Gaza businesses depend on imported raw materials and other supplies that must pass through the Strip's heavily secured border crossings with Israel, a procedure that has debilitated the economy over the years. With the sustained closure currently imposed on the crossings, the economy is on the brink of an irreversible collapse, possibly leading to long-term dependence on humanitarian assistance.

Prior to the 1990 Gulf crisis, the Gaza Strip's gross domestic product (GDP) was estimated at $300 million, the gross national product (GNP) at $494 million and the annual per capita income at $806. In contrast to output, disposable income and consumption per capita have shown considerable fluctuations in recent years. This was mainly due to the fluctuations in the inflow of external aid and, more importantly, to the substantial remittances from workers in Israel and abroad - especially in the Gulf countries - which represented approximately 50% of disposable income.
A 10-year comparison of the agricultural and manufacturing sectors illustrates the long-term structural deterioration in Gaza's economy. Between 1996 and 2006, agricultural output declined by 19%, but in 2006 this sector employed 80% more people than in 1996. Similarly, manufacturing value added declined 7% over 10 years, yet employment in the sector increased by 3%. According to statistics compiled by the Palestine Trade Center and the Palestinian Federation of Industries, more than 3,190 Gaza businesses have been temporarily shut down since July 2007. Some 65,800 workers have also been temporarily laid off. Up to 54% of employment in Gaza is generated by the private sector, representing more than 100,000 jobs. A loss of a third of those jobs could raise unemployment to an unprecedented 50% level. Using household income data, the Palestinian Central Bureau of Statistics (PCBS) reports that 84.6% of households are now living below the poverty line. Moreover, 53% of Gazan households had their income reduced by more than half in the past year due to the inability of the PA to pay the bulk of public employees' salaries (Oxfam, 2007). The World Bank estimates that 71% of public employees fall under the poverty line, and 46% do not have enough food to meet basic needs. Donor support had helped reduce consumption-measured poverty to 30% by March 2006 (PCBS, 2006). Since the Hamas takeover of Gaza in mid-June 2007, donor support has been scaled down or halted, but payment of salaries for most public employees has resumed. This data does not take into account the developments after the Hamas takeover and the siege imposed on the Strip. Currently, the depletion of coping strategies and unemployment have created an overwhelming dependency on humanitarian aid for large sections of the population (World Bank, 2007).

The Gaza labor force used to rely heavily on the Israeli labor market for employment, which peaked in 1987 at 45,000, or almost 40% of the total labor force. This figure declined to about 25% after 1987 (the first intifada), and further still since the establishment of the Palestinian Authority (PA) in 1994. In addition, about 30% of Gaza's industrial workers used to subcontract work for Israeli firms. Since September 2000 (the al-Aqsa intifada), almost as many jobs have been lost as were created in the preceding five years. UNSCO (2007) estimates that the overall adjusted unemployment rate for the Gaza Strip during the second quarter of 2007 increased from roughly 36% to approximately 50%. Expressed on a per capita rather than per employee basis, monthly wage income now stands at 186 shekels ($38), or 62.6% of the pre-September 2000 level. Lack of employment opportunities forced 10,000 people into unpaid work with family members, while another 10,000 left the labor market in 2006. The decline has hit Gaza disproportionately, where unemployment is about 6% higher than the national average, and this mirrors the growth in dependency ratios which have risen from 5.9 to 9.4.
When access to the Israeli labor market narrowed, Gazans began depending on PA payrolls for 45% of total employment. Israel's withholding of tax revenues of more than $800 million collected on behalf of the PA, and the lack of financial support from most Western nations have further reduced already limited resources, effectively preventing the PA from paying the bulk of public employee salaries since April 2006. Israel's prolonged closures of the border crossings - mainly of the Karni commercial crossing, Gaza's economic lifeline- will lead to an economic meltdown. The Rafah crossing, which is the only access point from the Gaza Strip to Egypt and the rest of the world, has also been sealed since the Hamas takeover. Only humanitarian aid is now allowed into Gaza through secondary crossing points. While this could be sufficient to head off a food shortage for the 1.5 million people, it is far from sufficient to revive a devastated economy.

The aftermath of the Hamas takeover has shown the centrality of the Palestinian private sector as the only area where sustainable development can be realized. Thus, support to the private sector should be an integral part of every donor intervention. In 1994-2000, donors injected an annual average of $350-450 million into the PA. In 2001-2007, the amount averaged about $650 million annually, of which less than 5% were invested in the private sector.
However, the growth of Gaza's private sector is constrained, not only by the lack of natural resources, but also by an underdeveloped infrastructure, scarcity of land and water resources, and security measures which lead to an uncertain investment environment, as well as to difficulties in importing raw materials and exporting finished products. Restricting the inflow of goods to humanitarian aid is destroying the business sector and creating a new welfare regime in Gaza. The opportunity to earn a living with dignity and to build a properly functioning economy is disappearing. 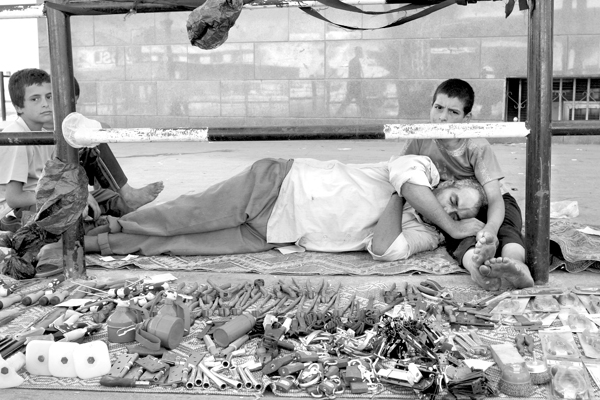 The current situation in Gaza could destroy the economy and create a new welfare regime. (Photo: Wissam Nassar/activestills.org)


Given this discouraging environment, private investors are unlikely to invest above current levels, which are already relatively high by historical trends. Despite the exceptionally high post-Oslo investment surge, reflecting an optimistic environment and high expectations from the peace process, the extraordinary restrictive Israeli measures that followed have led to the loss of up to one-third of the Palestinian physical capital and productive capacity (UNCTAD, 2006). It would be imprudent from a public policy perspective, therefore, to anticipate changes in private sector behavior.
To offset the effects of the imposed isolation on the Gaza Strip and reduce the risk to investors, economic policies must be put in place that should seek intensive exchange programs with neighboring Arab countries and larger distant markets. This will require time, international support and significant governmental guidance. Furthermore, grounding economic policies in a well-articulated national development plan and setting the economy on the path to recovery require a comprehensive trade facilitation overhaul as called for by UNCTAD (2003) and the World Bank (2004). Until tangible increases are seen in exports that can induce private investment, aggregate demand will remain dependent on government expenditures, which consist mainly of public employment.
An active and financially intensive PA trade policy will also be needed. Trade facilitation should seek to diversify Gazan trade away from its heavy dependence on Israel - to be supported by measures to enable the private sector to enter regional Arab markets and allow Palestinian transit trade to pass through Egyptian ports and facilities. Similarly, to improve the investment environment, the PA should establish investment funds targeting specific sectors with potential strategic priority.
In addition to reengineering the economy, it is essential to equip investors with a wider range of policies than those offered by the Paris Protocol. Although expanded policy space on its own cannot immunize Palestinians to the impact of occupation, empowering national institutions is essential to enhancing the private sector's resilience in the face of crises. Alternative trade regimes with Israel, the Arab countries and the rest of the world should be considered. Unemployment reduction should be the main benchmark guarding against further social and economic deterioration.

Despite Israel's redeployment from the Gaza Strip and the evacuation of the Jewish settlers, Israel has maintained its military occupation of the Gaza Strip and exercises strict control over Gaza's access to the outside world. The economy can easily be improved simply by having the barriers removed and allowing Palestinian goods to move according to the international "door-to-door" principle, whereby Palestinian goods can move freely, without the harrowing security searches from which Israeli goods are exempted.
Under the Oslo agreements, Israel was supposed to institute a "safe passage" between the West Bank and the Gaza Strip to ensure freedom of movement for Palestinians within the territories. The safe passage remained under Israel's strict control, which it proceeded to close in 2000, cutting off the Gaza Strip from the West Bank. Moreover, the Gaza International Airport also remained under strict Israeli control. In 2000, the Israeli military closed the airport and several months later destroyed the runway and control tower, with estimated damages of over $8 million. The PA must seek to have the airport reopened and restored to fully operational condition. The same goes for the seaport, the construction of which was stipulated in the 1999 Sharm el-Sheikh Agreement. In October 2000, construction was unilaterally halted by Israel as it refused to facilitate the entry of the necessary construction materials, and Israel continues to control Palestinian territorial waters. Here again, the PA should seek to build and operate the seaport in order to reduce the Palestinian economy's reliance on Israel's ports.
Following the mid-June 2007 events in the Gaza Strip, the hope is that the international community has come to realize the importance of the private sector. Forgetting this sector at this crucial moment would destroy the business sector and create a new welfare regime in Gaza. The donors' challenge is to convert assistance to the Palestinians into sustainable assistance, of equal priority to relief and humanitarian aid, but capable of creating an enabling environment that will allow the private sector to assume its leading role in the development of the Palestinian economy and the establishment of a viable future Palestinian state.