Neal Sullivan
Neal Sullivan is a marketing executive from Cincinnati, Ohio, U.S.A. His company, Good Fortune (www.goodfrtn.com), advises companies how to strengthen their Corporate Social Responsibility initiatives to the greater good fortune of their communities and bottom lines. He is visiting the Middle East for the first time to expand his horizons.

Wednesday, December 12th, was Day One of the four-day “Jerusalem Nights” program in East Jerusalem, an arts festival to celebrate and promote Palestinian culture and heritage in Jerusalem.

As it turned out, the event was one night of joyful music and three nights of soulful silence. Created by the Jerusalem Arts Network, Shafaq, in 2017, Jerusalem Nights offered 20 distinct live events over the four-day period ranging from a Christmas Tree lighting and carols with the Palestine Brass Band, to art exhibits, dance workshops, concerts, educational symposiums and more. 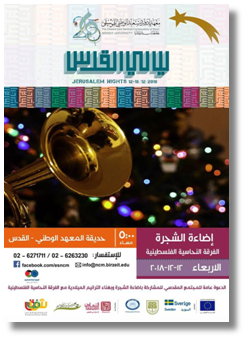 The events were staged at various venues across East Jerusalem, with many held at the Yabous Culture Center and Al-Hoash on Al-Zahara Street.

The agenda was culturally eclectic, creatively electric and ambitious in scope — a full-throated celebration of the Palestinian arts culture!

On opening night I attended a Christmas Carol concert by the Bayat Choir from a town called Mailya, near the Galilee, conducted by Samer Bishara. The concert was held inside St. Stephen’s Church at The Ecole Biblique Dominican. 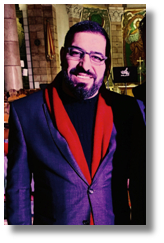 As a first-time visitor to Jerusalem, and having learned that just 2% of the population in the West Bank and East Jerusalem is Christian, I must admit I was a bit surprised to see the title “Christmas Carols” on the agenda. But what a wonderful surprise it was!

All the songs were sung in Arabic, but as music is a universal language and most of the carols familiar to me, I appreciated the passion and joy that sprung from the singers’ voices and musicians’ instruments.

The choir, half men and half women, had the audience of over 50 men, women and children swaying in their seats, the group’s voices filling the church’s high-ceilinged chambers. 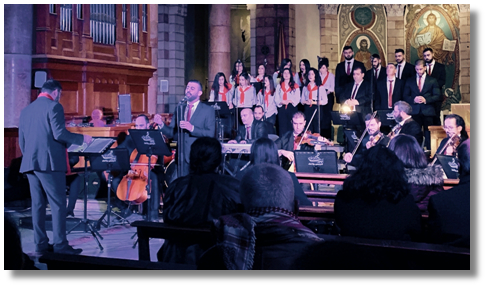 The Bayat Choir and Orchestra

The choir closed with an electrifying rendition of Jingle Bells that everyone in the crowd stood for, clapped and sang along with — even this English speaker (who sang Jingle Bells in English to the best of his rather limited musical abilities)!

The spiritual setting — the backdrop of religious paintings and gold-trimmed arches — was perfect for such a show, and a rousing kick-off to the four-day celebration!

Then the nights went silent.

On Day Two I went to see a performance at Yabous, the Palestinian Culture Center. When I arrived, the event hall was dark and empty. A man saw me standing there looking lost, and asked if I was there for the show. When I nodded yes, he told me it was cancelled.

“Because of the shooting this morning. In Ramallah,” he replied. I hadn’t watched the news nor read the morning paper. But knowing Ramallah as the seat of the Palestinian Authority, I assumed it was the shooting of a Palestinian.

The morning of December 13th, the festival’s second day, a Palestinian man was killed by IDF forces near Ramallah in the wake of the killing of two IDF soldiers and two civilians at a bus stop. A second Palestinian was killed in the Old City that same morning after he attacked two Israeli border police officers with a knife.

Jerusalem and the West Bank were tense.

Whether the shows were cancelled or just postponed until “things settled down,” the young man at Yabous did not know for sure. When I asked him who might know, he pointed to a building across the street, the office of the Palestinian Art Court-Al Hoash and headquarters of Shafaq. 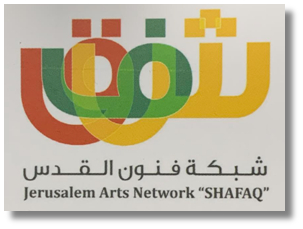 So I walked to Al Hoash to ask about the schedule of events for the rest of the week. There I met Daoud Ghoul, Director of Shafaq, who told me the shows were postponed for now, though subject to cancellation altogether, he wasn’t yet sure.

“This is a time to mourn,” he told me. “We should not be seen celebrating anything. It is as if we lost a family member,” speaking of the slain Palestinian men.

I felt for those families, plus those of the slain IDF soldiers and civilians, but I didn’t say anything. This was a time to mourn many things. He was right, there was nothing to celebrate.

I wrote earlier that Shafaq was a collective of art organizations whose purpose was to celebrate and promote Palestinian culture. But there is a subtext to it, as there is with most things (if not everything) in Palestine.

“Five art centers in Jerusalem have come together and formed a network called ‘Shafaq’ (which in Arabic means twilight). The five centers have agreed to a Jerusalem Cultural Strategy (JCS) based on the National Palestinian Culture Strategy, which will guide their joint efforts and will be the basis for their lobbying in putting Jerusalem and its community and arts on the priority list of all those concerned. These centers are: Al Ma’mal Foundation for Contemporary Art; The Edward Said National Conservatory of Music; Palestinian Art Court-Al Hoash; Palestinian National Theatre; and Yabous Cultural Centre” (with “Yabous" being the historical name for Jerusalem).

But make no mistake about it, Shafaq isn’t simply a consortium of art groups. This consortium is making a political statement.

“Israel is stealing our culture and history from us, to show it as their own,” Daoud told me. “We are fighting against that.

“We can’t use public spaces,” he continued, referring to Palestinians. “We can’t raise the Palestinian flag. But we are here! We have life, we exist. We can have fun, build houses and have families like humans. We show that through arts in a creative way.” 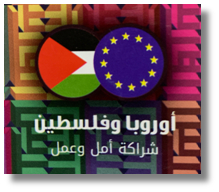 Later, I spoke with Dr. Adnan Abdelrazek, Chairman of the non-profit Al Hoash (and member of the Editorial Board of PIJ). As Director General at Jerusalem Studies and Field Research, formerly a political affairs officer for the Division for Palestinian Rights at the United Nations, and having a PhD from the University of Michigan, Ann Arbor, Dr. Abdelrazek knows politics. But he also has a passion for art — art for art’s sake.

While he understands and appreciates the points-of-view shared by the Director of Shafaq, Dr. Abdelrazek wants more from the Palestinian creative community, especially its artists.

Right now, he told me, artists are faced with a dilemma — if they want to make a living by selling their work, consumers expect to see symbols of resistance and resilience in the piece. Which limits artistic expression.

“Yes, we want to express our identity to Palestine and Jerusalem. But that is not enough,” he told me. “Good Palestinian art is not the machine gun or olive tree. It is good ART!

“If you are going to paint a keffiyeh, at least paint it artistically! Paint it well!”, he said. “But we must move beyond symbols.”

When I asked Dr. Abdelrazek what is meant by saying Israel is stealing the Palestinian culture, he answered that a majority of Israelis are settlers from another land, from Europe, and “they cannot invent having a Middle Eastern culture.

“Falafal, hummus, pita…showing Al Aqsa in their tourist brochures? Changing street names? We in Jerusalem are very worried about it. We are losing our uniqueness. They (Israel) do not want to see anything uniquely Palestinian,” he said.

To Dr. Abdelrazek, there seems to be a much larger and more significant point to this discussion on art and its protection and promotion of the Palestinian culture.

“My life is not about fighting for the hummus! We are obliged with our (Palestinian) art to be Universalists, to be like other people in the world. I want to be part of this world!”

As it turned out, the remainder of events on Days Two and Three of the Jerusalem Nights festival were cancelled amid threats of unrest in the West Bank.

The festival resumed — without music — on Saturday, Day Four.

No more Jingle Bells. No more Rock & Roll Caroling. Nothing but silent nights.

On Saturday afternoon I went on an architecture tour of East Jerusalem, part of Jerusalem Nights, with a group of about 10 Palestinians, mostly young women. Daoud Ghoul was on the tour with us, which demonstrated another point he made about Palestinians when we spoke two days earlier: 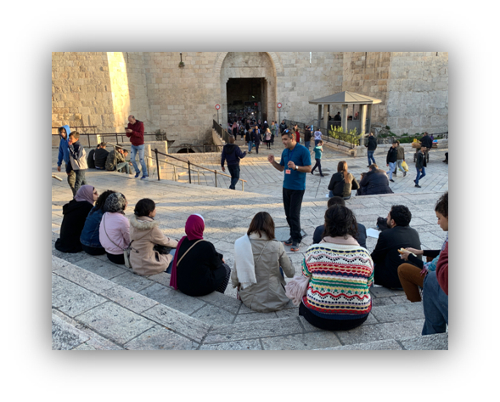 And yes, they are part of this world.